Aerial view of Yerba Buena Island, with San Francisco in the background

Yerba Buena Island is a dramatic and historical part of the City by the Bay. An army camp was set up here in 1868, which in 1875 led to the construction of a still-preserved octagonal lighthouse. Over the years it has been called Sea Bird Island, Wood Island, and Goat Island, but in 1931 it was restored to its original Spanish name. The Yerba Buena Tunnel runs through its center and connects the western and eastern sections of the San Francisco-Oakland Bay Bridge.

Now, after decades of transition and struggle, the island is home to some of the most dramatic and beautiful residential areas in the world spread over 72 acres. Aptly named Hilltop Park will crown the island’s summit and was designed by landscape and public artist Walter Hood, who received the MacArthur Genius Grant in 2019. There are also five miles of wooded, winding dirt roads and gravel trails, as well as a sheltered sandy beach called Clipper Cove.

The island of Yerba Buena remained in military hands until the 20th century. The Works Progress Administration created the adjacent 403 acre Treasure Island in the 1930s. It was supposed to be the San Francisco airport and for a time served as the departure and landing area for Pan Am’s China Clipper. In 1996 the military base was shut down and both Treasure Island and Yerba Buena Island became the responsibility of the City of San Francisco.

“When Treasure Island became a naval base, officials lived on Yerba Buena Island,” said Chris Meany, partner at Wilson Meany, a San Francisco-based boutique developer who is building 266 residences on the island with the Stockbridge Capital Group .

“Treasure Island is artificially created and therefore flat like a pancake. The island of Yerba Buena, on the other hand, is a natural island with scenic beauty and steep hills. 70% of the island is a restored natural habitat. From here, homeowners have some of the most beautiful views in the world in every direction. “

Every element of the project was designed by award-winning Hart Howerton. The Island Club, a private, multi-story local hangout designed by San Francisco-based company Aidlin Darling Design, provides a 10,000 square foot oasis to relax and recharge.

Bristol, a six-story condominium building with GreenPoint-rated sustainable interiors designed by Edmonds + Lee Architects, has 124 condos on offer, ranging from as little as $ 800,000 for studios to as little as $ 3 million for three-bedroom units. Other accommodations include Meyer Davis interiors townhouses starting at $ 3 million and the apartments, which offer LEED-certified luxury single-story residences, also designed by Meyer Davis, starting at $ 3.9 million. 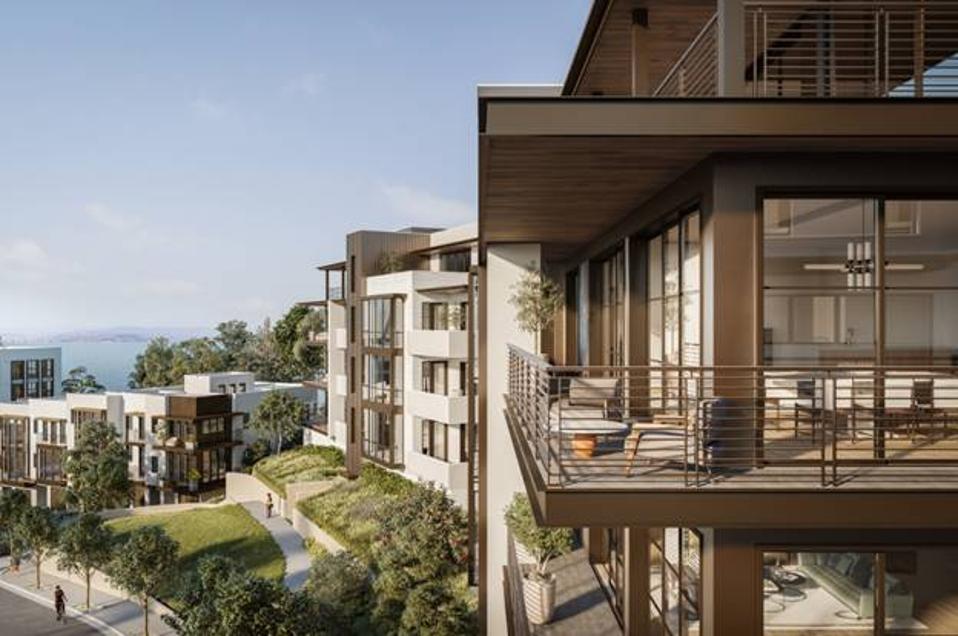 The apartments on the island of Yerba Buena, boutique buildings each with one-story residential buildings … [+] which are served by a private elevator that leads directly into the house.

“We are very proud to officially launch sales on Yerba Buena Island at a time when ethos and lifestyle experience are so important,” said Mike Leipart, managing partner of Agency Development Group, who is responsible for the marketing and sales of Yerba Buena Island monitors. “Owning a home on Yerba Buena Island is truly a once in a lifetime opportunity to step into a unique, special setting from the ground up. The residents will create the first of their kind neighbors who value connectivity, a holistic and wellness lifestyle, and an appreciation for natural surroundings. The residential collections in particular are diverse – from spacious single-family row houses to luxurious condominiums with numerous amenities – so that families, couples and singles can find a home that meets their needs and wants. Yerba Buena Island is San Francisco and lives at its best. ”

It wasn’t easy to come here. In San Francisco, the tension between non-growth advocates and the need for housing is particularly high.

“In the 1990s the city of San Francisco decided it needed housing, but the anti-development mood is strong in beautiful places like this,” Meany says. “By the time we got final approval, we had held 450 public sessions and had been sued by non-growth advocates for three years.

“This process is now behind us. We installed new infrastructure on the island, including new in and out ramps to the Bay Bridge and better power that was brought underwater from the city. A year ago we started construction of the Bristol Condo Building. People will move to the island at the end of January. “

Infrastructure improvements include a new ferry service between the Ferry Building in San Francisco and Yerba Buena Island. The ferry ride takes eight minutes and is a rare bargain at $ 2.

“Yerba Buena Island was closed to the public for many years,” says Meany. “Now it will be a public resource: people can bike to the island and spend the day hiking, picnicking and taking in the great views.”

The San Francisco bakery is awakening its cruffins for the second...

Does the girl’s nightly sport with the San Francisco cat make...