Matt Hickman reports on San Francisco’s newest inclusive memorial to the Architect’s Newspaper, designed by SWA, a company that operates two Bay Area studios (San Francisco and Sausalito) and offices in Texas, Southern California, New York City and Shanghai. Selected from 17 invited offices by FHMP from a shortlist of four companies that had submitted proposals, SWA shared their winning concept design for the memorial at Harvey Milk Plaza.

Earlier this year, Friends of Harvey Milk Plaza (FHMP) selected SWA Group to lead the design of an inclusive new LGBTQ + space anchored in a memorial at Muni Metro Station in the Castro neighborhood of San Francisco. Now, just days before Harvey Milk Day, May 22nd, the company is officially announcing its conceptual design plans, which circulated during two feedback-seeking virtual town hall meetings in mid-April.

Completed in 1980 on the corner of Market and Castro Streets, designed by Howard Grant of Reid & Tarics Associates, the square is named in honor of pioneering community activist and San Francisco Board of Supervisors Harvey Milk, who was murdered in his office at San Francisco City Hall on November 27, 1979, after serving in that position for nearly a year. Milk, who was 48 at the time of his death, was the first openly gay elected official in California history. During his brief tenure, the New York native, fondly known as the Mayor of Castro Street, made a huge lasting impression after sponsoring a law in 1978 that was eventually passed by the San Francisco Board of Supervisors and signed by then-Mayor George Moscone —Prohibition of discrimination in employment, home and public accommodation based on sexual orientation.

Husos Architects: “We don’t want to contribute to the homogenization of the world around us” 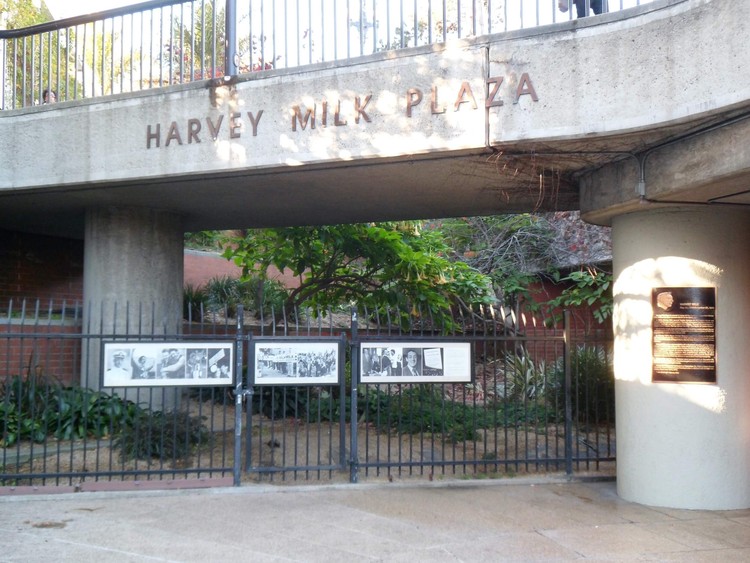 As noted in a press release, SWA, which operates two studios in the Bay Area (San Francisco and Sausalito) and offices in Texas, Southern California, New York City and Shanghai, was selected by FHMP from a shortlist of four companies that submitted design proposals ; a total of 17 different companies were invited to submit. As noted, FHMP and SWA have so far hosted two virtual meetings with the Castro community and will “continue their robust public relations and engagement efforts to involve the community in the memorial design process and ensure inclusiveness for all”. The selection of SWA comes after an earlier, often controversial, redesign of Harvey Milk Plaza under the direction of Perkins Eastman, which was eventually discarded after a series of revisions and rejections by the community. Perkins Eastman’s San Francisco office, along with Groundworks Office and Kuth Ranieri Architects, was one of three local offices shortlisted by FHMP for the first redesign in September 2017 after an international design competition. 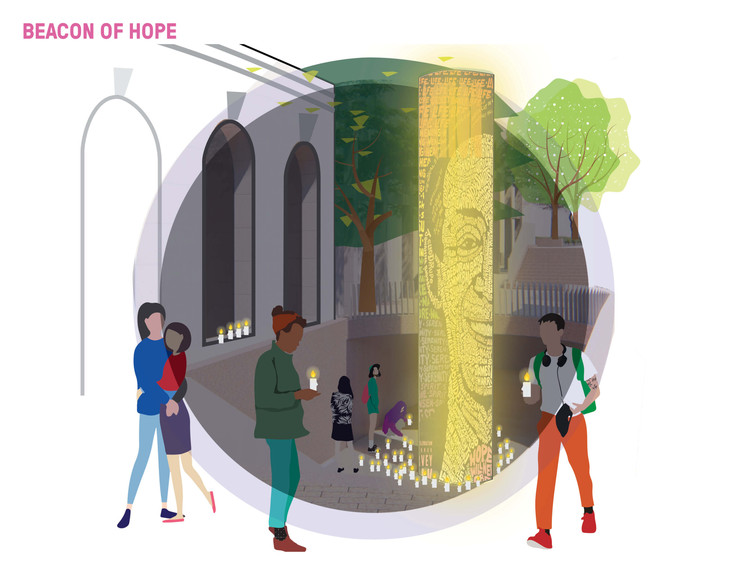 “Friends and SWA have already started talks about creating an unconventional and inclusive design process so that these qualities of Harvey Milk and his legacy are inherently part of the design produced,” said Brian Springfield, interim executive director of the established FHMPMP in 2016 to ensure that any future redesign of the square will require a thorough community contribution.

He added, “During this process, we’ve heard from the community that they want a next generation memorial that is as unique and unconventional as Harvey himself. Now that SWA is on board, we’re excited to be with the public again Get in touch to see what is possible to honor Harvey Milk in a way that draws attention to the continued activism around social justice issues that Harvey campaigned for during his lifetime. The memorial will be alive with Harvey’s politics, including his call on others to get involved. “

Formerly a working-class neighborhood, the Castro became the epicenter of San Francisco’s gay life in the mid-1960s and remains an iconic and historically significant center for LGBTQ + activism, culture, and commerce known around the world.

To honor Milk’s profound legacy in the heart of the neighborhood he lived in and briefly featured in the San Francisco City Hall, SWA created a design that consists of three core elements that are confined to the existing floor plan of the square: the pedestal, the beacon and the memorial grove. (Other larger design concepts that extend beyond the square were also unveiled during the engagement sessions in April.) The design will be finalized later this year after further engagement with the community. 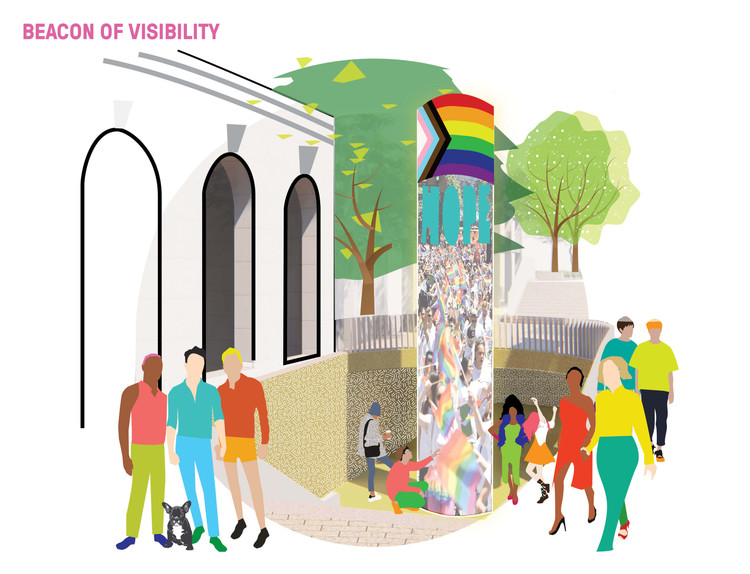 The pedestal feature is literally that – a circular elevated platform for parishioners to amplify their voices and be heard loud and clear by crowds and passers-by. As noted by SWA, the pedestal is a way of ensuring that Milk’s last words – “All I ask is for the movement to continue” – is materialized. “This approach does not honor Harvey by putting it on a pedestal, but by creating a stage for community and movement: a living monument that changes over time,” the company said.

The Beacon is conceived as an ever-evolving “digital monument”, a type of photo-activated kiosk that shows not only images of Milk itself, but also historical photos of Castro along with images of queer life in San Francisco and beyond, as well as images that capture the “struggles and victories” of the equality movement that Milk played such a significant role in sparking it. “The digital component is flexible and nimble, and allows changes to be made to convey messages of protest and celebration when the community gathers on the site,” said SWA. “The Beacon can also serve as a center of hope when people come together at Harvey Milk Plaza to comfort or support one another.”

Photography played a key role in Milk’s life as he was an avid amateur photographer and ran a popular neighborhood camera store, Castro Camera, from 1972 until his death. Talks are reportedly underway to track the National Park Service’s historic designation for the storefront, which also served as Milk’s campaign district and is a designated San Francisco landmark. Most recently it served as an action center and outpost for the human rights campaign and before that as a call center for the Trevor project. 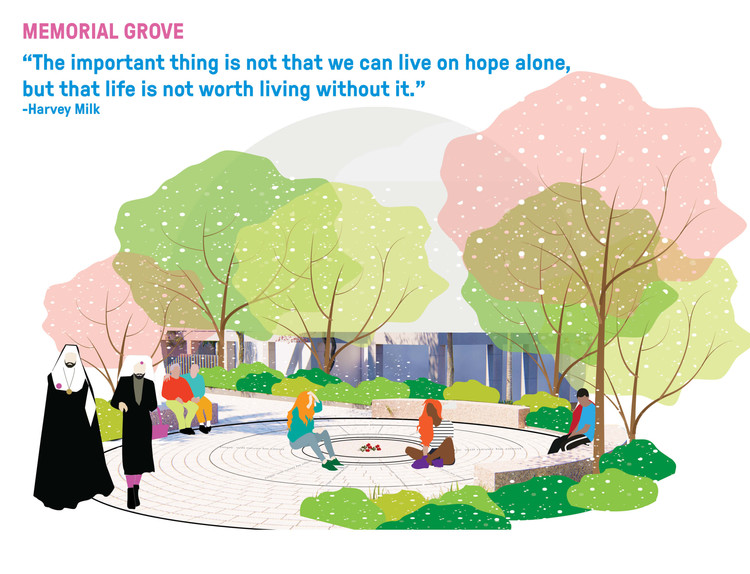 Finally, a popular proposition for parishioners, Memorial Grove will be a shaded green space on the western edge of the property populated by 11 trees, one for each month that Milk was in office. As described by SWA, the trees are species that represent geographic locations associated with Milk’s life, including a tree from his native New York and a tree from Texas, where Milk grew up during his more transient 20s after his Discharge from the Navy briefly lived. The remaining trees will represent San Francisco. Per SWA, the “eclectic collection of complementary but different trees embodies Harvey’s informal personality and political style, as well as the beauty and diversity of the people of San Francisco”.

“We believe the memorial should speak as loudly and without apology as Harvey – not just about the progress he’s made, but about the work still to be done,” said SWA project leader Daniel Cunningham. “To be worthy of Harvey’s legacy, his memorial should be a living memorial – relevant and effective today – dedicated to realizing his vision of equality and authenticity for all, everywhere.”

Funding for the memorial at Harvey Milk Plaza is expected to come through a public-private partnership. In February 2020, the project received a government grant of US $ 2 million that was launched by State Senator Scott Wiener. As already mentioned, a finished design will be presented later this year. Regardless of the memorial project, Castro Muni station itself is undergoing a $ 14.5 million barrier-free overhaul, including the installation of a new elevator. Work is scheduled to start this fall.

This article was originally published in The Architect’s Newspaper.

Mission’s Little Rez was once the center of Native American life...

How the State Can Help Cities Plan Density With Affordability –...