Spiegel Aihara Workshop architecture firm in San Francisco has expanded a hillside residence from the 1930s by duplicating the layout and stacking it over the original structure, raising the house so it looks over the city’s landmarks.

The A-to-Z house is on a slope that slopes down towards the bay. Despite its ideal location, the residence was previously too low to enjoy the view of nearby historical sites. 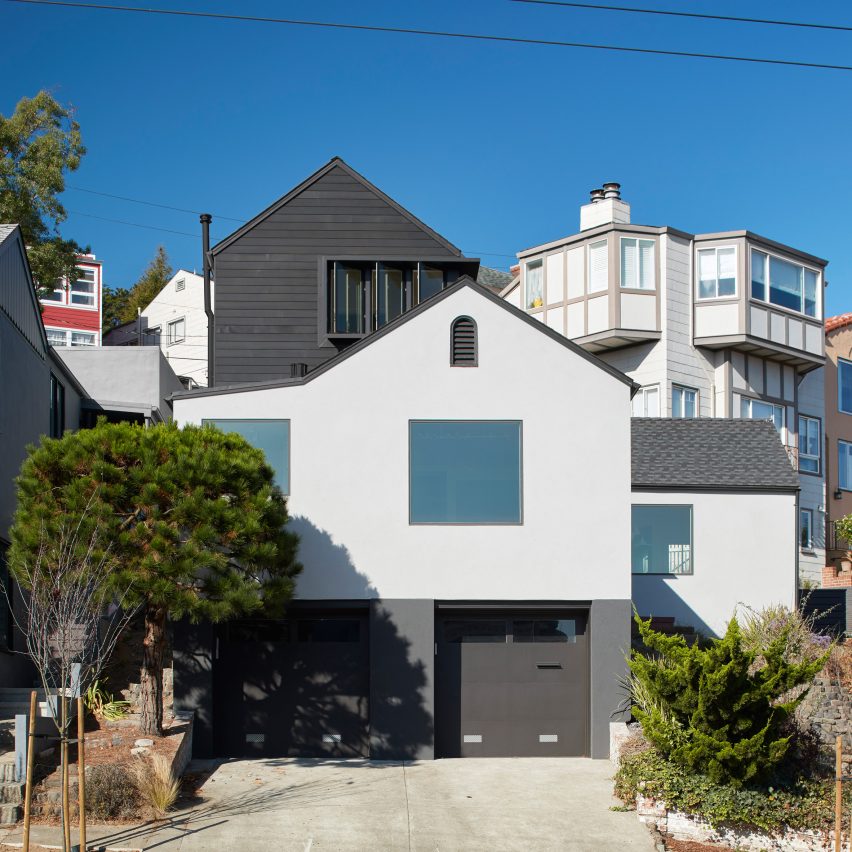 During the renovation of the house, the architects partially retained the old building – white plaster walls support a gable roof over an L-shaped floor plan. To create the extension, the structure was replicated, tweaked and put back into the house. 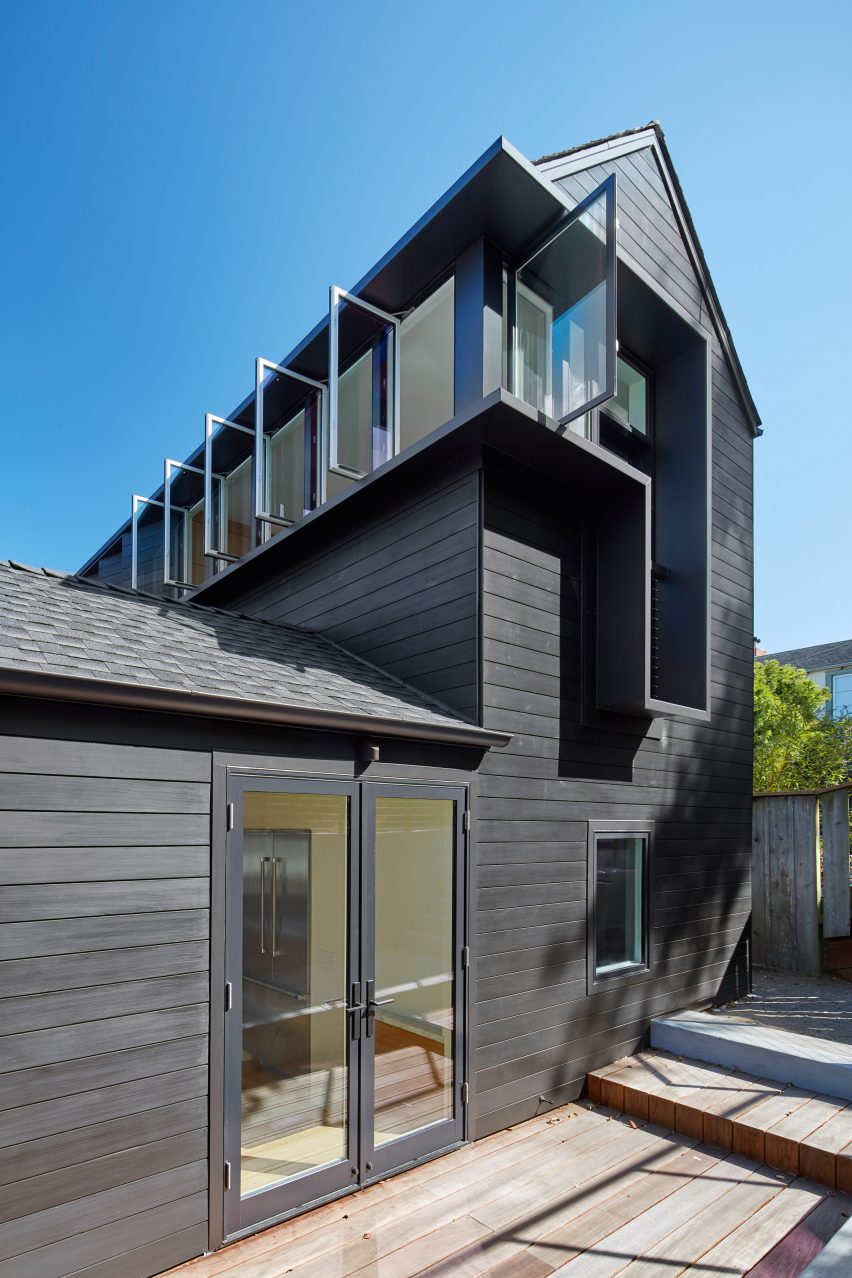 The short leg of the addition’s L-shaped floor plan sits next to its original counterpart, while the long section has been raised to a second floor.

Although the corner structurally connects the two segments, the architects divided the interior of the extension’s nexus over two floors. 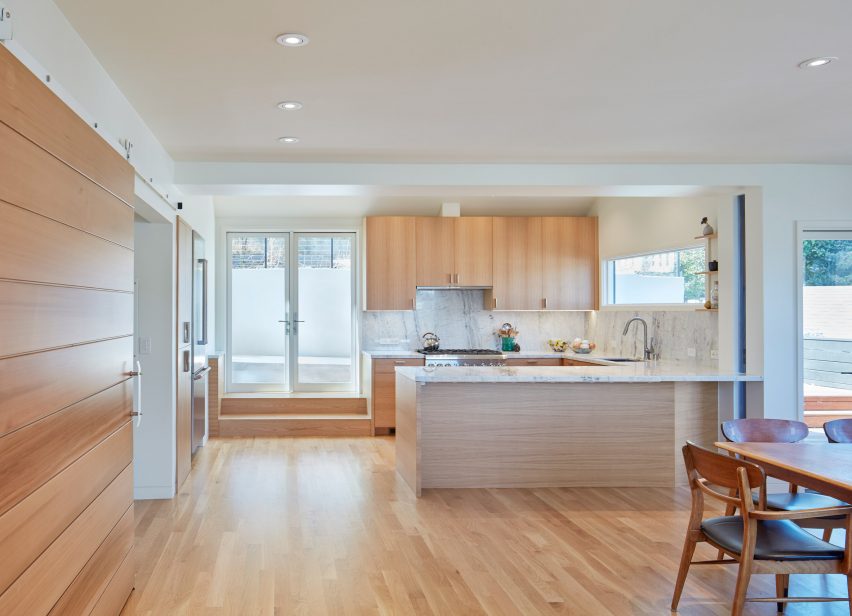 The house from A to Z takes its name from the design process. The architects copied the previous structure – in two A-shaped facades – and relocated them along the Z axis and reinserted them into the building.

The aggregation of similar forms maintains the unity in the outdoor area. Although the white walls of the original building contrast with the blackened wooden panels of the addition, the repetition of angled silhouettes creates a cohesive whole. 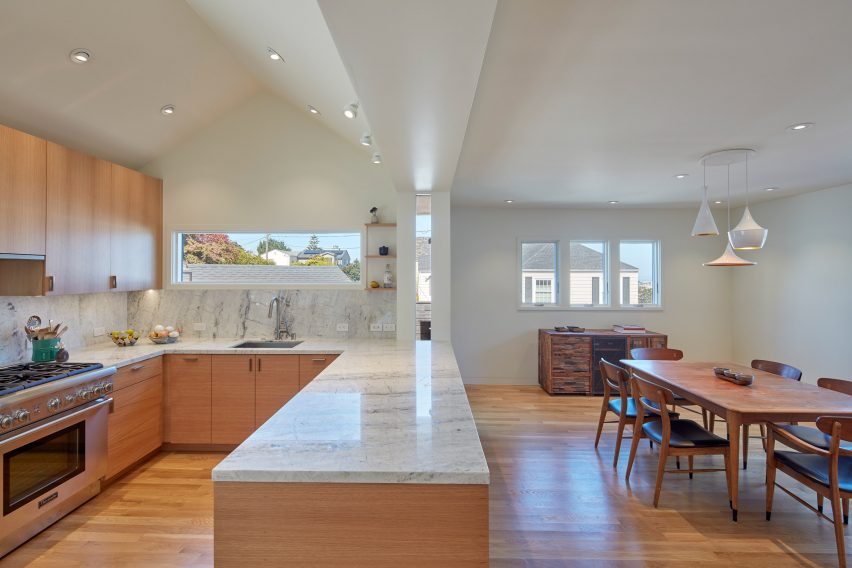 Glazing also helps unify the exterior by creating a transition. The architects placed a thin strip of glass where the two volumes cross on the ground floor.

A series of windows that wrap around three sides of the upper volume mark where the company placed the extension in the old roof. 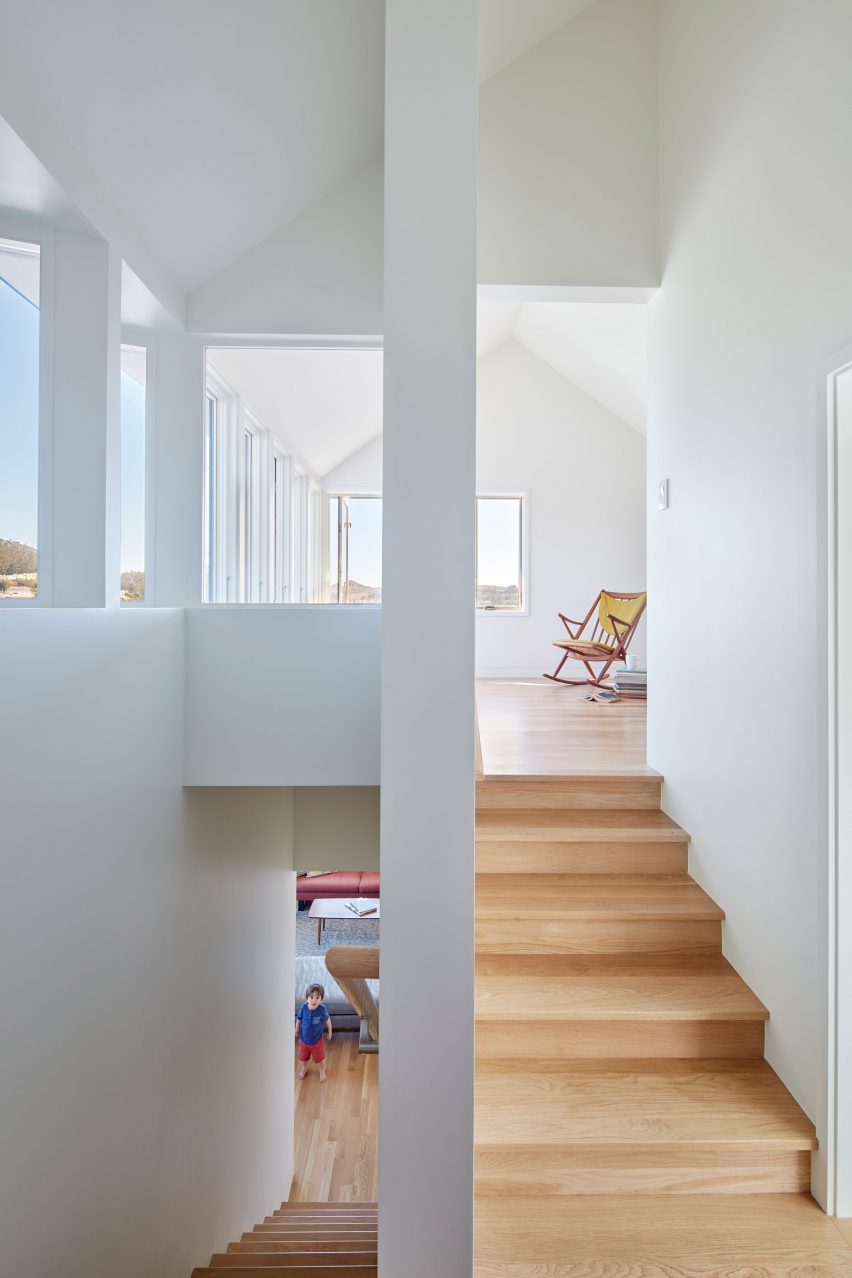 Inside the house, the architects seamlessly connected their two parts. Large, minimally framed windows have been inserted across the building, while whitewashed walls and light wooden floors reflect the additional light and make the interior appear spacious.

At the inner corner of the L-shaped floor plan, the entrance to a lounge opens at the eastern end of the ground floor with a view of the street. The dining room to the right of the entrance is combined with a kitchen in the extension and forms a spacious room. 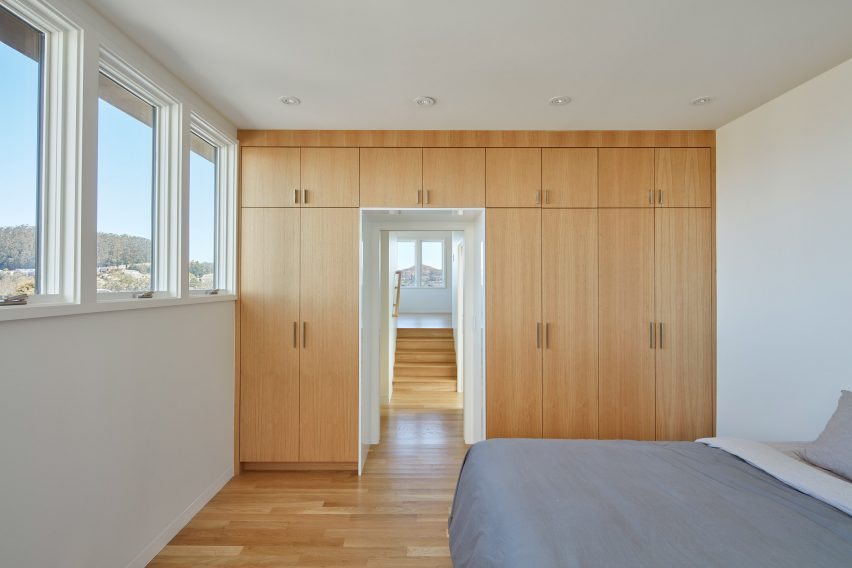 On the west facade a large glass door leads into the terraced garden that leads up the hill. One bedroom occupies the southwest corner.

The square intersection between the rooms to the west on the ground floor houses a staircase that leads to a landing on the upper level of the extension. 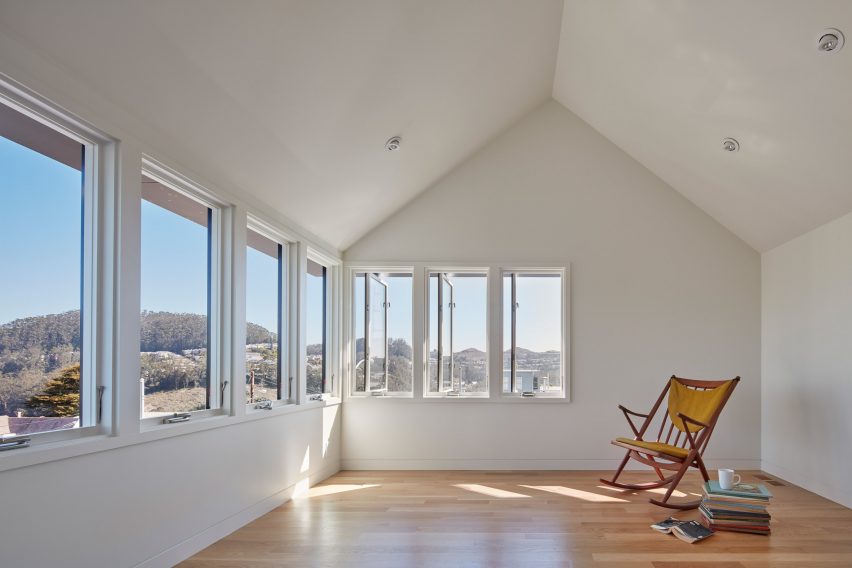 The architects divided the volume into two slightly offset rooms and connected them via a short staircase from the central passage.

A bedroom with high ceilings occupies the western half, while a study is on a slightly higher level in the eastern part. 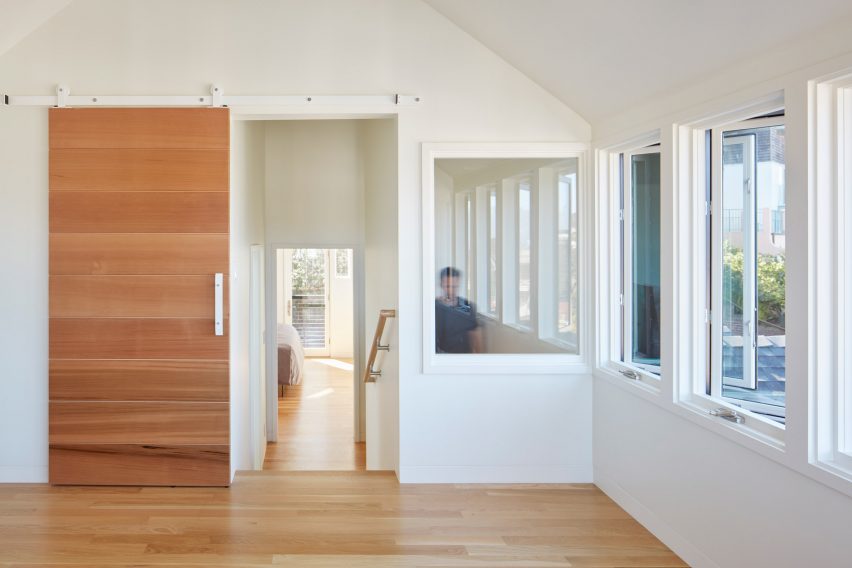 Since the row of windows on the first floor remains level, the glazing in the two upper rooms offers different perspectives to enjoy the surrounding landscape.

“Inside, variations in floor height and ceiling height offer different possibilities to experience this horizon in every room, from the wide view to the private vantage point,” the architects say. 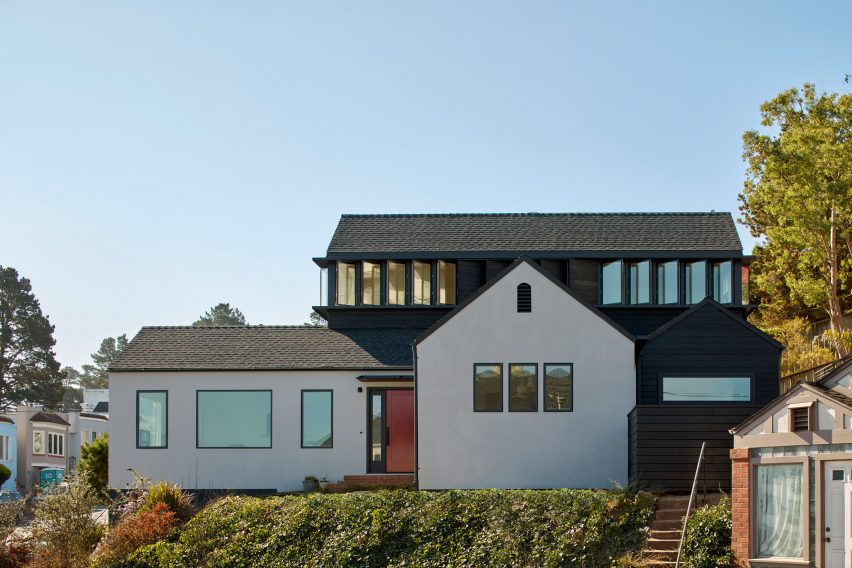 Other hillside residences that have been renovated to take in scenic views of San Francisco Bay include a 1930s cottage with floor-to-ceiling glazing and a modern mid-century home with leafy terraces.

The photography is by Bruce Damonte. 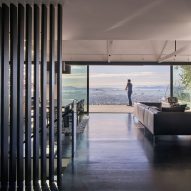 700 pipes were donated to protect the Asian seniors stolen in...