Gil Payumo and Evan Kidera from Señor Sisig are finding ways to give back during the pandemic through their # Sisig4thePeople initiative. BY JENNIFER FERGESEN

The first Señor Sisig truck rolled into San Francisco in 2010, part of a wave of food trucks driven by chefs struggling to open restaurants in the sluggish post-2008 economy. His signature product, pork sisig in a hearty Mission-style burrito, was ideal for the frugal moment: “The price, the compactness, the portability, everything that works,” says Kidera.

Señor Sisig soon gained cult following, with the lines routinely stretching across the block they had parked on. Guy Fieri attended his Food Network show Diners, Drive-ins and Dives as did Eddie Huang from Fresh off the Boat TV. In the years that followed, business grew in step with the American economy. Kidera and Payumo expanded their fleet from one food truck to six and opened their first stationary restaurant in the San Francisco Mission District in November 2019. Two months later, the first coronavirus case was confirmed in California. and on March 16, the Bay Area declared the nation’s first shelter.

“Integrating the entire brand that we had built up over nine years into a restaurant was a new experience for us,” says Kidera. “And we were just starting to get our feet under us and then the virus hits.” Like virtually every business owner in coronavirus-hit regions, he and Payumo have been tasked with adapting to a new economic reality – one even stranger and less predictable than the Great Recession.

They made some changes to blend in with their clients’ lifestyles. Four of the six Señor Sisig food trucks are grounded, and the remaining two are now driving the streets of areas where large concentrations of Filipinos live, including Daly City and Oakland, in lieu of business centers like the Financial District and SoMa. But Kidera says sales were better than expected. The restaurant has held its own through take-out and delivery, thanks in part to an online ordering system set up before the crisis, and the trucks benefit from their mobility. “At times like these, we can go elsewhere if it doesn’t work there,” says Kidera. “While there are companies stuck in the financial district where there aren’t any (customers), I feel terrible to them.”

The two Señor Sisig trucks that are still on the road are now parked in areas that are densely populated by Filipinos, such as Oakland, instead of in business districts.

Kidera and Payumo are grateful for their relative success and have found ways to give back. In April, they launched a crowdfunding campaign called # Sisig4thePeople to donate 10,000 meals to seniors and low-income families in the Bay Area. So far, they have raised enough money to offer over 1,400 meals. They also took part in the #FilipinosFeedtheFrontlines campaign launched by Kultivate Labs. Meals are offered to health care workers at several hospitals in the Bay Area. Kidera was invited to attend the Filipino Food Movement’s Savor Filipino Summit in June to share his experience with fellow food business owners. 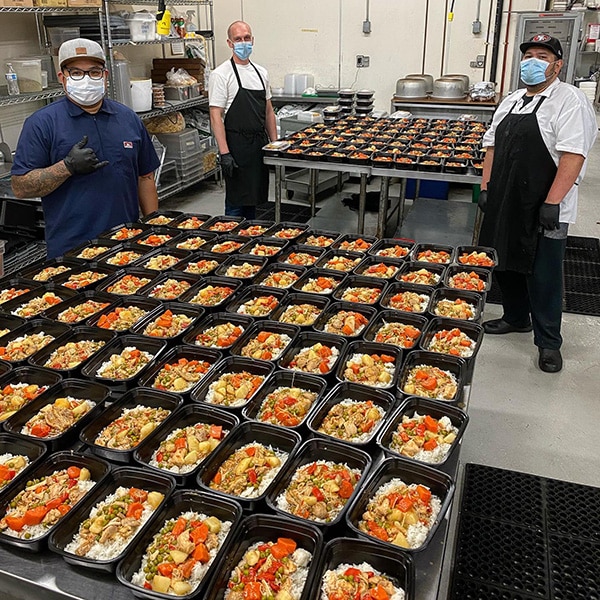 Evan Kidera and his staff are preparing meals for the donation through the #FilipinosFeedtheFrontlines and # Sisig4thePeople campaigns in their inspector’s kitchen.

“We’ve all had fights to deal with, be it a personal fight or your relationship fight or a group fight or a city-wide fight, but no one has ever dealt with anything on this scale.” he says. “There is no way for one person to fix everything, but if we all play and listen in some way and do our part, we will change something here. And so we just do what we can. “

In California, officials are hoping the worst of the fight is over. Governor Newsom did not allow essential businesses to reopen May 8, and some restaurants across the state are already serving food, albeit with masked servers and tables far apart. (At the time of writing, the infection rate in San Francisco hasn’t dropped enough to allow dine-in service.)

Kidera is not aiming to open again. “If we can work like this, and it’s safer for everyone, we might as well be able to keep doing what we’re doing,” he says. He and Payumo are also looking for safer ways to celebrate their 10th anniversary in June, which they wanted to celebrate with some kind of birthday bacchanal that now feels like a relic of the past. Instead, they released an anniversary t-shirt that comes free with a $ 100 donation to the # Sisig4thePeople campaign. They hope to spend their birthday month making videos highlighting the mom and pop shops that are next to their Mission District restaurant.

“Some of these old generation restaurants are in danger of going out of business, and that’s scary,” he says. “For me, it’s even bigger than a single company like Señor Sisig. … We really, really need to impact our communities and our culture here in San Francisco because we risk losing a lot if we don’t see it that way. “