Most of the changes in San Francisco over the past century have undoubtedly made the city better for its residents.

But while huge improvements – like the removal of the neighborhood-desecrating Central and Embarcadero highways – made the city better, other changes resulted in sadder road development. Corners of the city that are thriving with life, culture and neon light are going into urban development. Jazz clubs, ornate movie palaces, and bustling sidewalks that have been leveled to make way for skyscrapers, Starbucks, and lots of concrete.

We found seven places in San Francisco (and one in Oakland) that were almost indistinguishable from their former self. However, if you look closely, some of the remains of the old town are still proud.

Neon in the market

A look at Markt and 7th from 1959 and today. The Odd Fellows Temple is circled in green.

One of the saddest street changes can be seen here: San Francisco’s beautiful neon theater district near the Civic Center is now history. The eye-catching signs on this postcard from 1959 include marquees for the Embassy Theater, United Artists Theater (later Loew’s Theater, where the world premiere of “Dirty Harry” was shown in 1971), Paramount and Warfield.

The Embassy and Paramount, once some of San Francisco’s most popular entertainment spots, are long gone. The embassy (barely) survived the earthquakes of 1906 and 1989, although it was badly damaged in 1989. It was demolished in the mid-1990s. The same fate befell Paramount in the 1960s. Theaters that rented office space on the upper floors, like the Warfield, had a better chance of survival.

One of the only consistent signposts in this section of the market is the staunch Odd Fellows Temple. Surprisingly to a fraternal organization, the lodge has a lighted sign that makes it look more like the movie theaters on the block than a hangout for club members. It’s still fun to see the building today; It is adorned with Odd Fellows symbols such as stars, all-seeing eyes and tripartite chains. 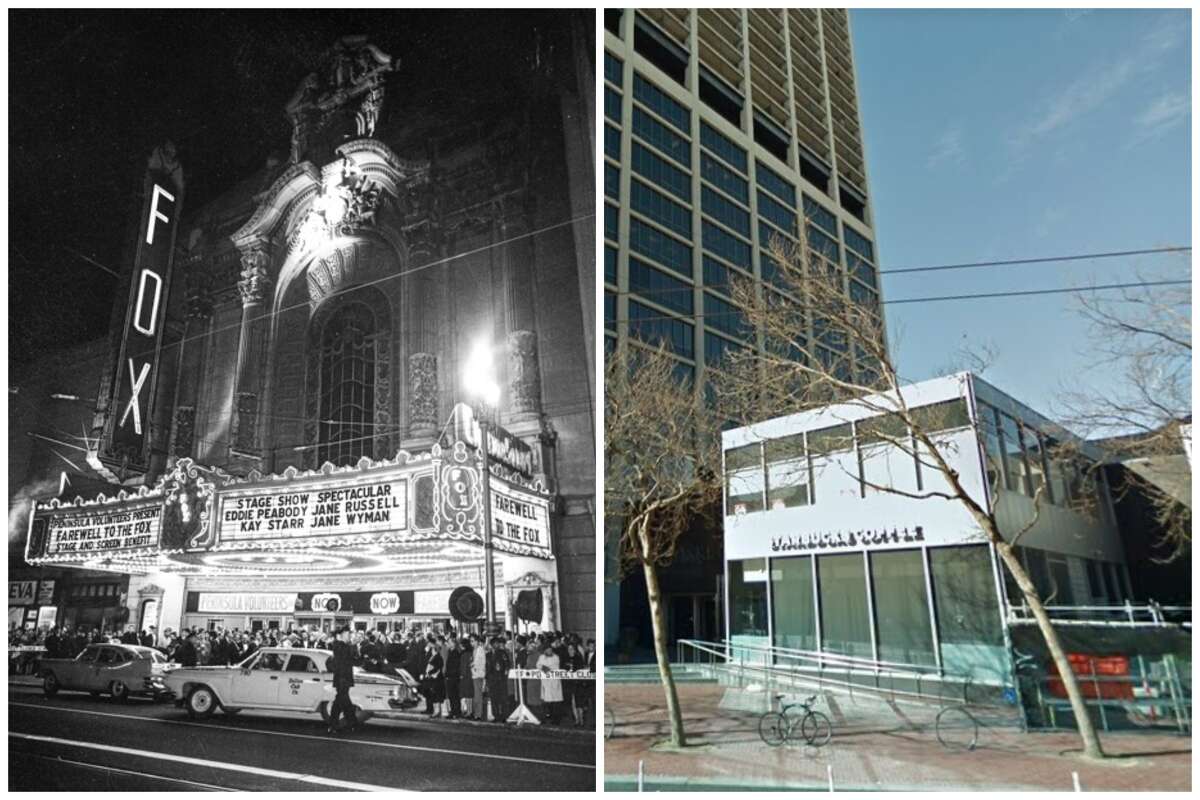 The Fox Theater on Market Street in 1963 compared to today.

A few blocks up Market Street from the old theater district there is a lifeless, windy corner that perhaps shows the greatest contrast in the streets of San Francisco from Old Town to this day.

For 34 years, William Fox’s “greatest theater in the world” at 1350 Market St. was a thriving entertainment cathedral. The huge 4,600-seat movie palace was built to serve the customers who flocked to Hollywood’s growing reach in the 1920s. The ornate lobby had a gold leaf ceiling, rich tapestries, and numerous antiques.

But by the 1960s attendance had dropped and the glory days of the Fox Theater were numbered. The building was about to be demolished despite a passionate “Save the Fox” campaign.

At the end of the theater’s two-night sold-out farewell shows in February 1963, when a spotlight flashed over the crowd outside, organist George Wright played “I Left My Heart in San Francisco” for the last time when his Wurlitzer in the orchestra pit.

The relics were sold, and the building was razed and eventually replaced with the uninspired 29-story office building that now stands next to a Starbucks, a few scattered pedestrians, and some dying trees. 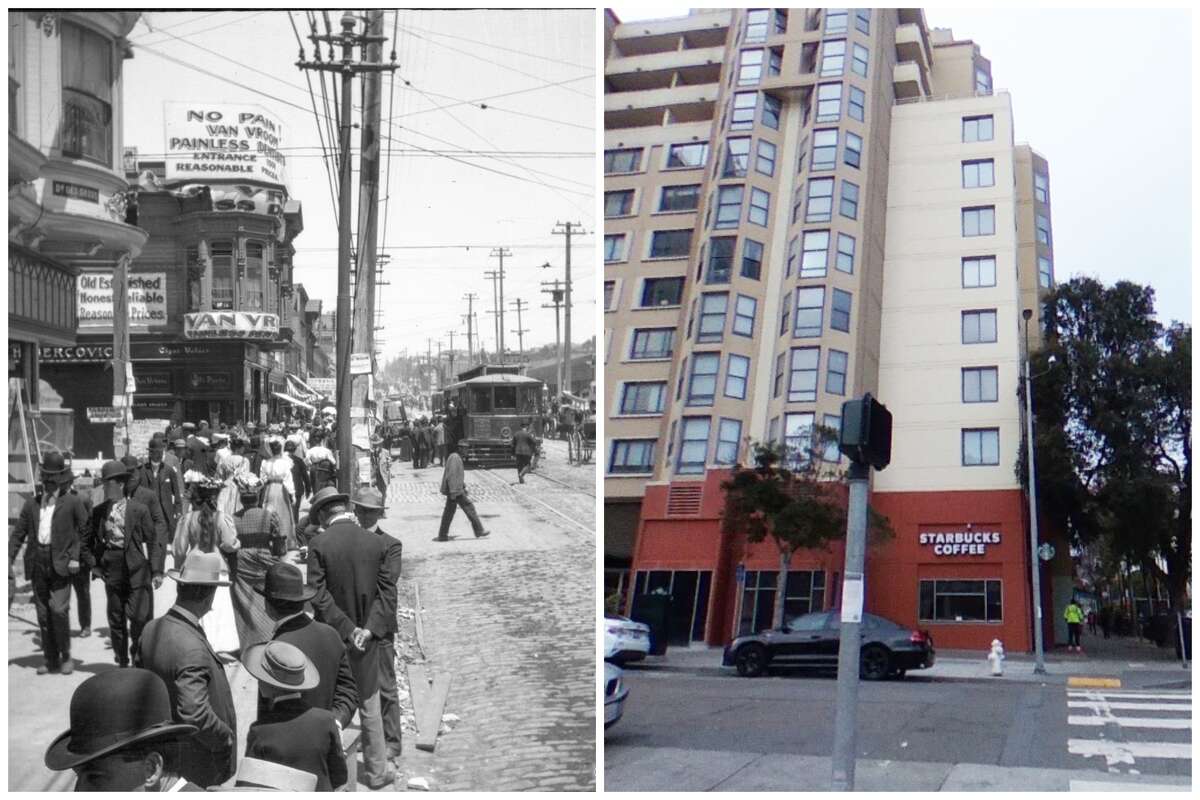 Fillmore and O’Farrell’s corner. The archive photo was taken in 1908.

This 1908 archive shot, looking north at Fillmore across O’Farrell Street, shows a bustling neighborhood that is returning to city life after being destroyed by the earthquake and fire just two years earlier. The 1906 fire was finally stopped by a firebreak on Van Ness, seven blocks east, allowing the Fillmore to lead the city’s comeback as it became one of San Francisco’s major commercial and cultural centers.

The old scene shows a doctor’s office in a Victorian corner building facing the intersection and San Franciscans crouching on trams while a horse and cart go by. The north corner of O’Farrell is home to Van Vroom’s “painless” dentistry and below that is a cigar shop.

Years later, after becoming one of the most vibrant black jazz strips west of the Mississippi, any Victorian structure in sight would be razed to the ground in one of the most deplorable urban planning decisions in the city’s history.

While city planners, led by controversial administrator M. Justin Hermann, claimed the decision was based on the rising crime rate in the neighborhood, most saw it for what it was – a racially motivated removal of African Americans from the district. The renovation project in the 1960s affected almost 100 city blocks and displaced more than 20,000 mostly black residents.

The district has seen some renovations in the past few decades, including the jazz scene, but the Starbucks and high-rise condos that now tower over O’Farrell and Fillmore are a shadow of what was once the bustling corner of city life a century ago.

The many lives of Pacific Avenue 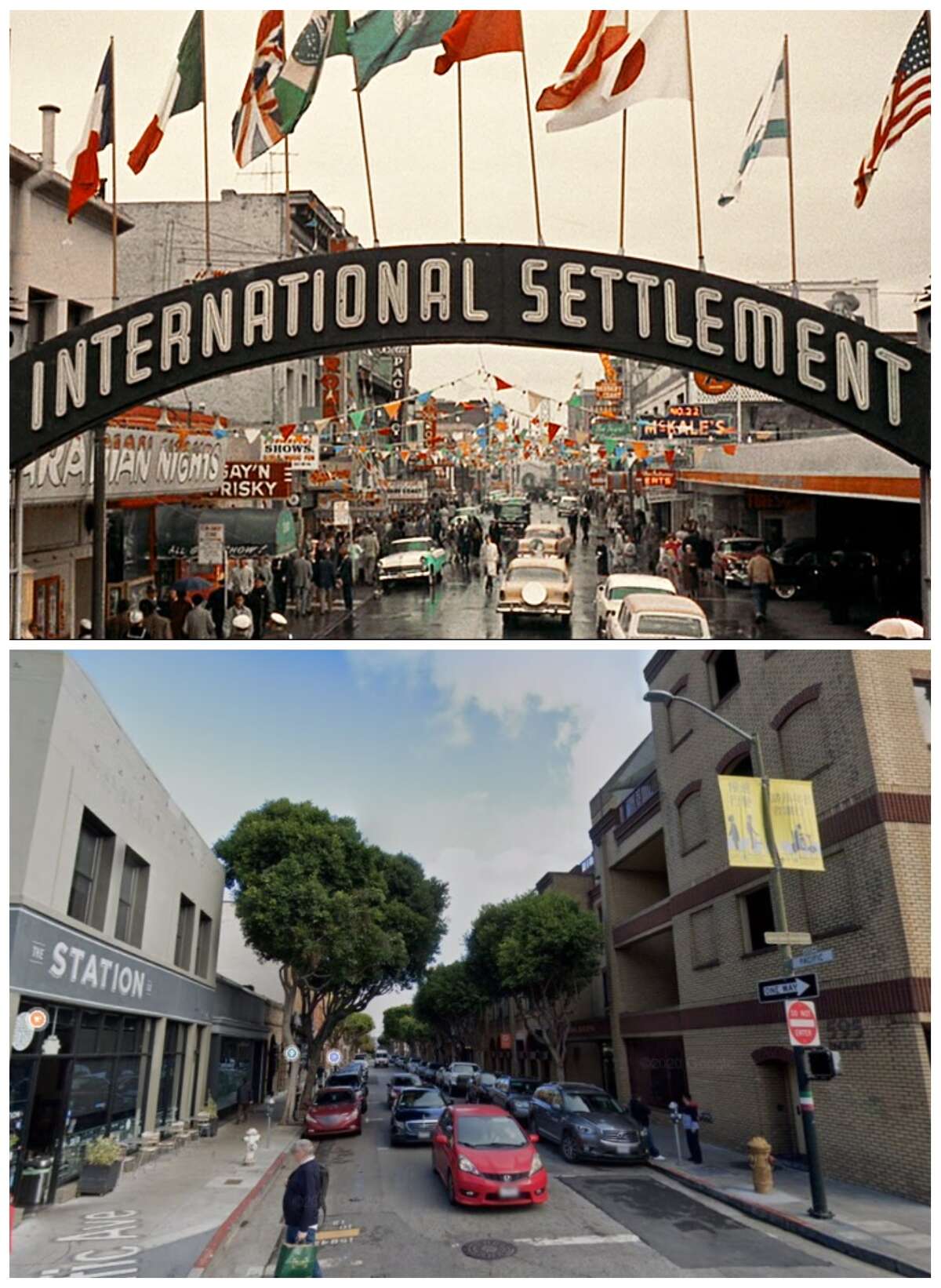 Pacific Avenue in Kearny 1957 and today.

There may not be a single block in San Francisco that has been more renovated than Pacific Avenue between Kearny and Montgomery. Once the heart of the infamous Barbary Coast, the filthy, violent strip served the vices of the thousands of young men who came ashore to find gold in the 1860s. It was rebuilt after the 1906 quake and renamed Terrific Street, a filthy, damp strip of nightclubs and jazz clubs frequented by buttoned-up middle-class businesspeople making “slums” and on the rambling side of San . too fed up with seeing Francisco.

The wild side of Pacific Avenue was finally about to be tamed in the late 1950s, when the crude eateries were replaced by respectable furniture and curtain stores and the historic block hasn’t changed much since then. 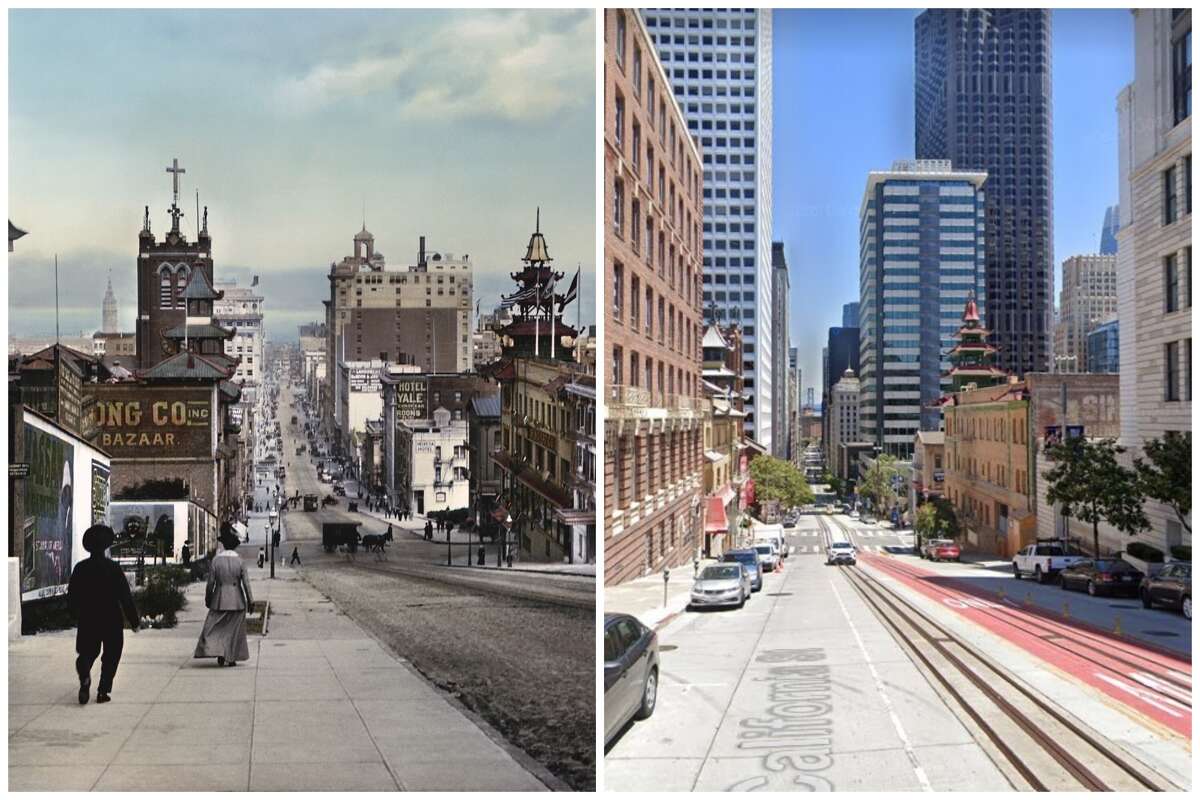 Looking at California and Grant in 1915 and today.

With a few notable exceptions, the view down the steep block of California Street towards Grant Avenue in San Francisco’s historic Chinatown is barely recognizable today compared to this archive photo.

The man in the hat walking down the hill in 1915 has a clear view of Old St. Mary’s Cathedral to the left – unsurprisingly, as that building was once the tallest building in California, although it is now not even the tallest building on the block is. In 100 meters he can see the strange sign rising from the tower: “Son, watch the time and fly from evil”, which is still visible today.

The other tall building on the right – under construction from today’s perspective – is the pagoda-like old building of the Sing Fat Company. The architecture in the Chinese style, however, was not built by or for the Chinese residents, but by the white architects Ross and Burgren in 1910 as an “Oriental Bazaar”, which is tempting for tourists. 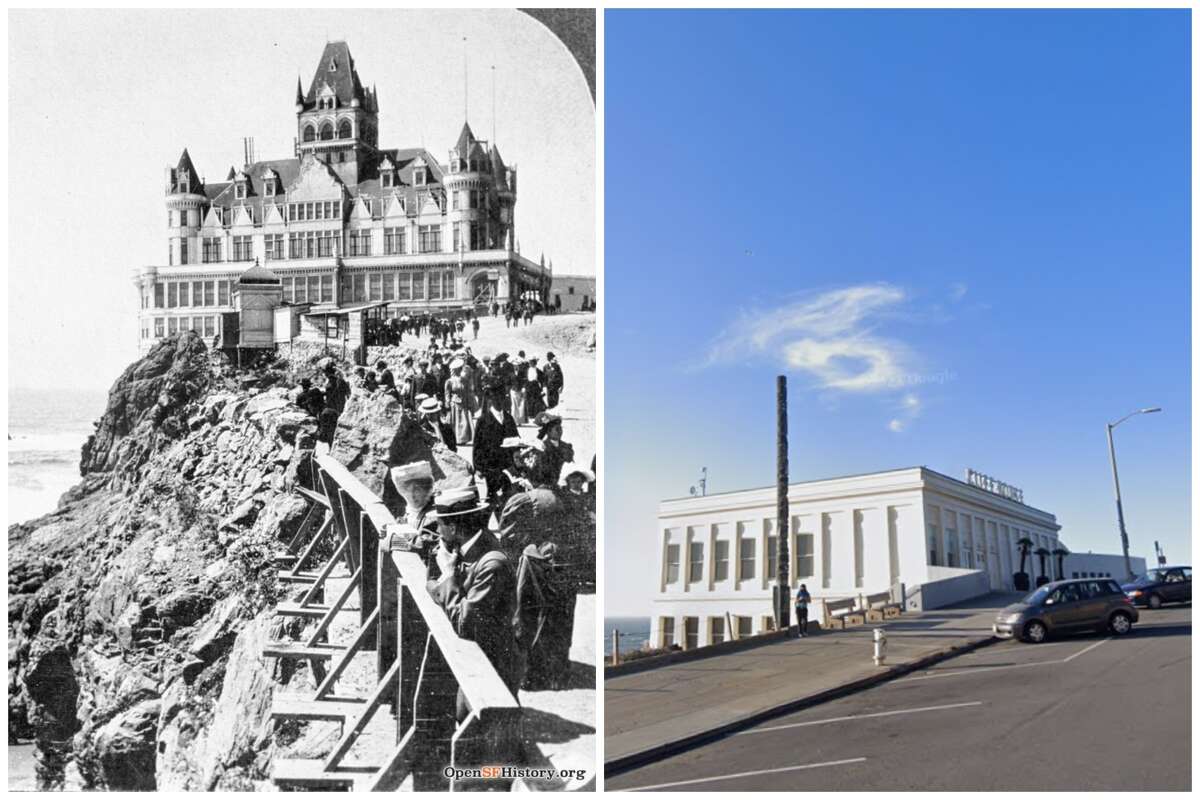 The Cliff House in the early 1900s compared to today.

After the first Cliff House burned down in 1894, there was great dismay that property owner Adolph Sutro would destroy the aesthetics of the area with his new building. “[Architects] fear that Mr. Sutro will sacrifice art for use and make the Cliff House more of a mockery than a joy, ”the Examiner annoyed in 1895.

Instead, he created one of San Francisco’s most photographed buildings, a seven-story Gothic gingerbread fantasy. Next door, he also added the sutro baths, creating a huge entertainment complex along the coast. But by the middle of the 20th century both burned down.

While some may like the crisp, clean lines of the current version of the Cliff House, we think it doesn’t compare to the opulence of the 1890s. Coupled with the fact that the site used to be a public park covered in statues and ornate landscaping, the area now looks more antiseptic. 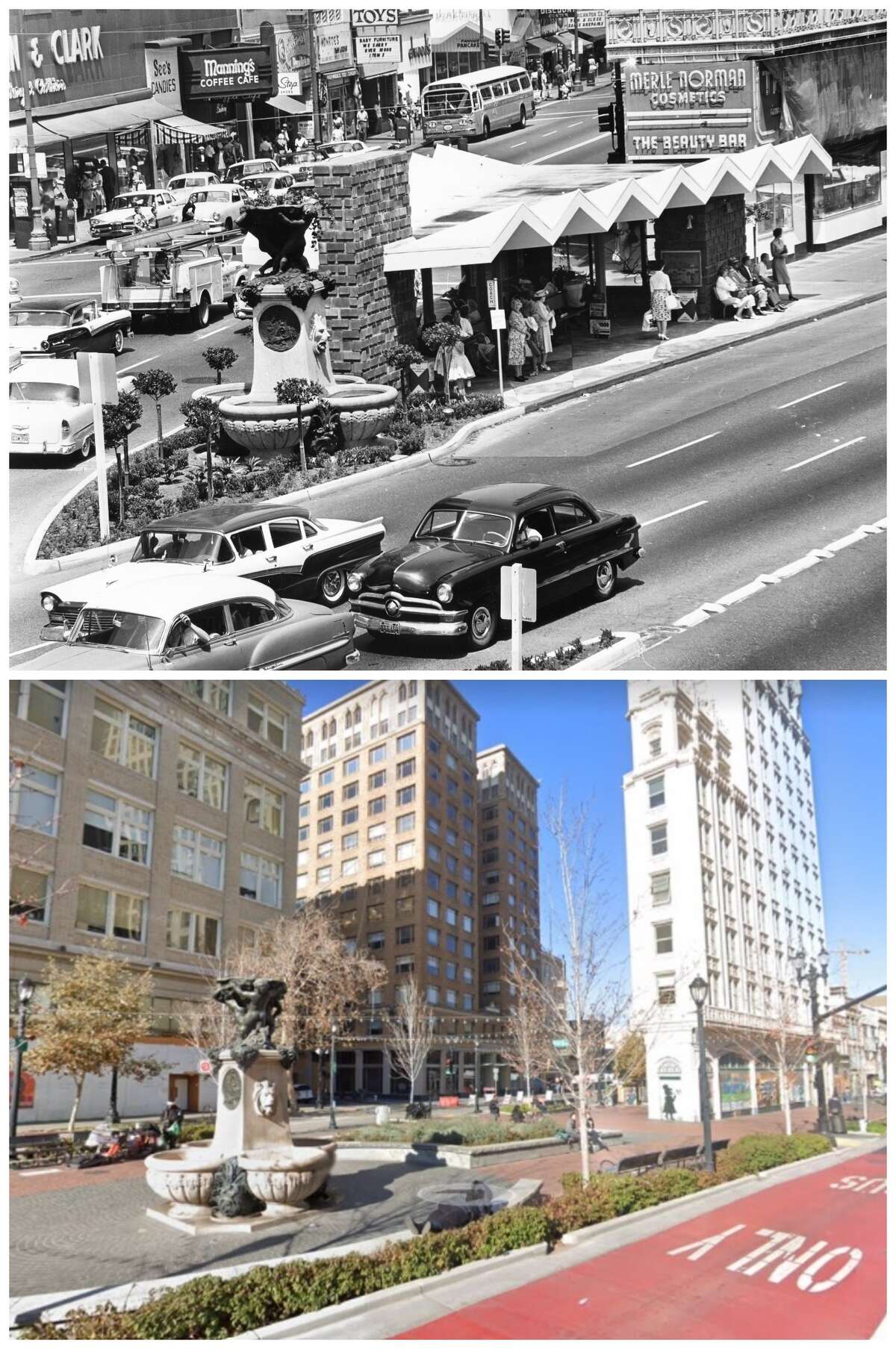 Latham Square in downtown Oakland where the Telegraph and Broadway intersect. The archive photo was taken in 1961.

It’s not as noticeable as some of the other transformations, but this little corner in Oakland primarily interested us as an example of how public space has changed over the past 70 years. Eagle-eyed locals may recognize the lion fountain that serves as the centerpiece of Latham Square on Telegraph and Broadway. Much of the attractive landscaping has been removed over the decades, as has a spectacular AC Transit bus stop.

Gone are all the adorable retail and restaurant signs like Monroe’s Toys, Pam’s (which advertises “famous pancakes”), Manning’s Coffee Cafe, and a See’s Candies. Behind the square still stands the slim and impressive cathedral building, which was completed in 1914. At that time, as the sign shows, it was a Merle Norman. Today the first floor is home to – you guessed it – a Peet’s.

Top of the brand 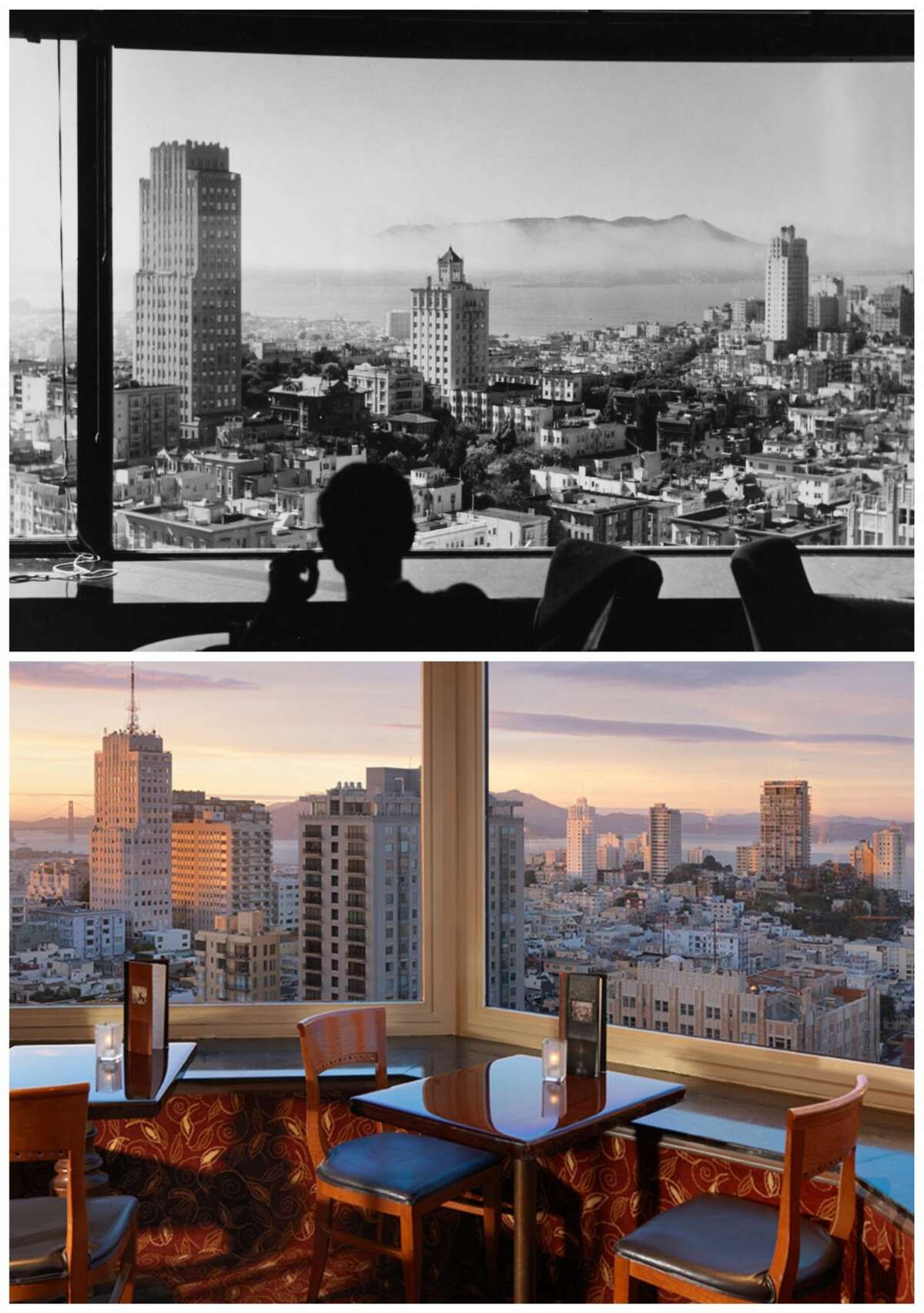 The view from the Top of the Mark in the 1940s and today.

Since World War II, generations of San Franciscans and tourists have viewed the city skyline from the top of the march.

Once the penthouse on the 19th floor of the Mark Hopkins Hotel, the suite was converted into a cocktail lounge in 1939. During the war it gained national fame as the farewell drinking place for many troops on their way to the Pacific.

The black and white photo shows a customer in the mid-1940s looking at Nob Hill’s tallest buildings, such as the Clay-Jones Apartments and Bellaire Tower (where Gavin Newsom once lived in the penthouse). The current view of the Golden Gate Bridge, while still beautiful, especially on a clear day, isn’t quite as iconic, now peppered with a range of nondescript condos and condos.

Teachers in San Francisco receive a single-dose vaccine from Johnson &...

What is the pattern for San Francisco’s meals?

The Full Information to Consuming and Consuming in San Francisco