The famous mid-century developer Joseph Eichler built around 11,000 houses over the course of his career. By combining the post-war tract house trend with architect-designed plans, Eichler offered middle-class homebuyers the opportunity to own a well-made, still relatively inexpensive house that felt designed in a word.

With glass-walled rooms oriented towards inner courtyards and atriums, gently sloping wooden floorboards and radiant heating, Eichler’s compact little testimony to fresh air, modern amenities and accessible design (although, as an NPR story from 2015 noted, contemporaries were used to slandering things they looked “kind of weird”.)

Most of Eichler’s models were developed by Anshen and Allen, Claude Oakland in the Bay Area and Jones & Emmons in LA, and were single-story homes in suburbs like Walnut Creek, Concord, and San Rafael. In 1950, the arrival of the San Francisco Redevelopment Agency laid the foundation for a suburban-style experiment on a hill in San Francisco.

In the 1950s, the part of the city now known as Diamond Heights felt more like a rural outpost than a neighborhood in San Francisco. The land was on a craggy ridge above Glen Canyon – defined by Red Rock Hill, Gold Mine Hill, and Fairmount Hill – and was home to 158 homes and only 374 people.

Up until the 1930s, dairy cows grazed over a quarry, according to urban design critic John King of the San Francisco Chronicle. The steep topography had hampered development: a third of the roads had gradients of more than 20 percent and another third had gradients of more than 30 percent. Until the city began to fill on its southern and western edges, there had been no need to tame an isolated hill.

The post-war years were an idealistic time for city planners who became more and more enthusiastic about the idea that social grievances could be eliminated with good planning. The redevelopment agency, which had begun planning its controversial (and now thoroughly rejected) urban renewal campaign to destroy the Fillmore, began viewing the Red Rock, Gold Mine, and Fairmount hills as a site for bourgeois housing.

According to architectural historian Richard Brandi, who wrote this story extensively in the Journal of Planning History, city planners knew displaced residents of Western Addition couldn’t afford middle-income homes, but they envisioned this evolution of the trio’s number of Hills above Glen Canyon would ease general housing pressures in the city. 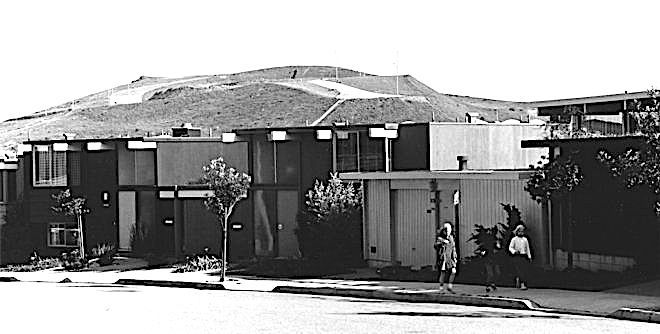 Although the plan was to densify the area – at the time Planning actually supported the idea of ​​building towers on hills! – DeMars made sure it stayed a hamlet by restricting access to the neighborhood to one major thoroughfare, Diamond Heights Boulevard.

Side streets parted, meandering around the topography, avoiding the kind of clear syncs that traffic would create. Although the coordinates of Diamond Heights were in San Francisco, its confusing anti-street grid made it the urban equivalent of an area development. The curvilinear plan that climbed the hill also ensured that each house had a view over the roof lines of its lower neighbors. 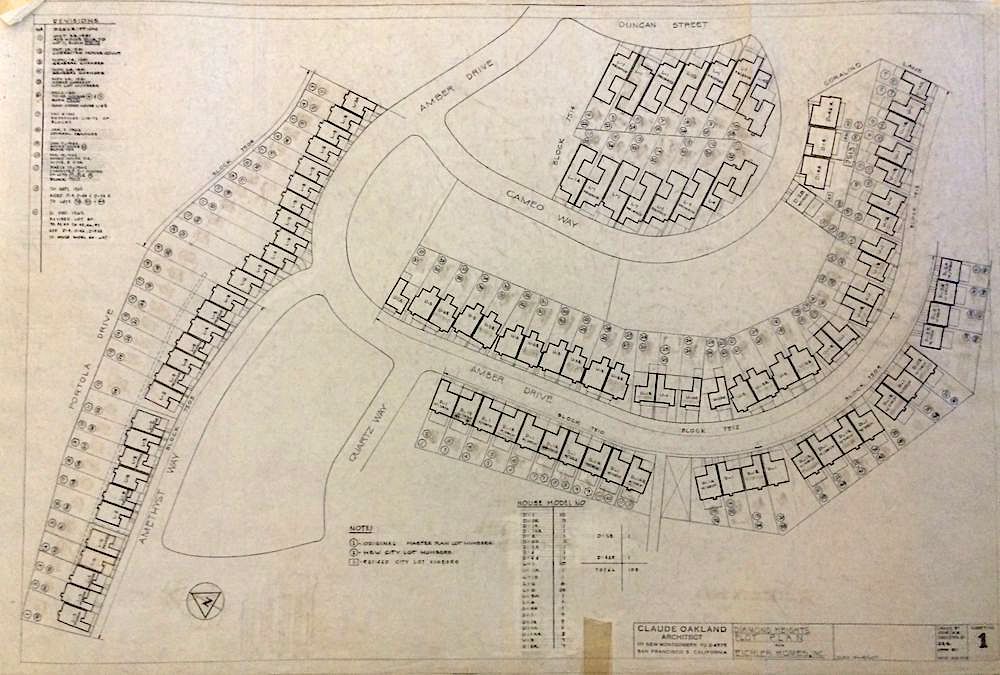 The plan included schools, a fire station, a trading strip, and a community center on the saddle between the Red Rock and Gold Mine hills. The city owned part of the land, but in order to acquire the rest, the redevelopment agency declared 325 acres contaminated – an unusual move for a largely undeveloped area, Brandi notes. This was achieved thanks to a technical measure in the California Community Redevelopment Act, which saw the scarcity of paved and stepped roads as a form of the epidemic.

DeMars finalized his plan in 1952, but construction didn’t begin in earnest until the 1960s. Opposition in the neighborhood increased and the public opposed, among other things, the destruction of a rural atmosphere. The NIMBY hype was alive and well in the 1950s. Brandi quotes a speaker at a public hearing in 1952 who equated the redevelopment agency with forces no less shameful than instigators of nuclear warfare:

Now we’ve been living here under the atomic bomb load for the past three or four years, but I hope God we didn’t get a bomb on us from the Planning Commission.

After the redevelopment agency had established its legal position, the renovations and infrastructure work began in 1960. The crews moved two million cubic feet of earth into the depression between the Red Rock and Gold Mine hills and smoothed the ground into a new flat area for the community center and parking lot. On Red Rock Hill, which was flanked by lower-lying apartments, floors between seven and twelve stories were to be built.

Due to funding issues and a developer change, the Diamond Heights mid-rises were ultimately never built. (Fun fact: after Eichler’s summit tower rose on Jones and Green Streets, to the delight of residents and to the chagrin of neighbors, the planning department pondered its policy towards towers on hills, as Paul Adamson notes in his Eichler story: Modernism Rebuilds the American Dream.) 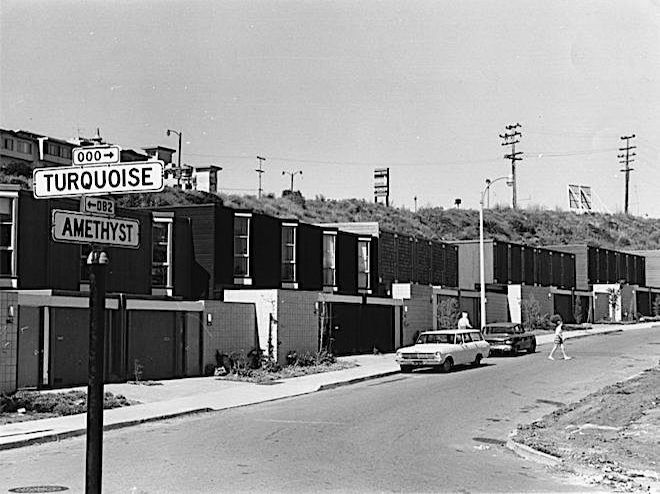 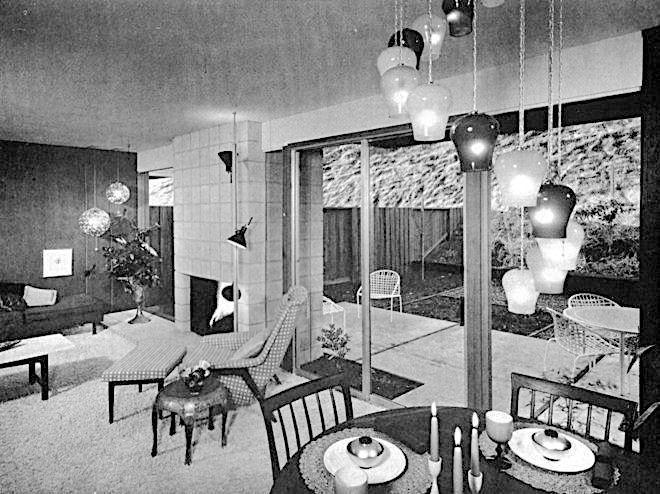 Eichler Homes received a development contract together with the developers Ring Brothers and Galli Construction. The company’s 100 homes are concentrated on Amethyst Way, Amber Drive, and Cameo Way. In a move away from Eichler’s single-story suburban houses, Adamson notes that architect Claude Oakland developed a hybrid model that would fit in with the neighborhood’s hillside properties.

They had small inner courtyards that corrugated the atria of the Vorstadt-Eichlers and consisted of three levels, which were accessible via a central staircase. This format was reminiscent of some of the developer’s townhouses. The simple facades were taken up by garages on the ground floor, while the upper floors had narrow vertical windows.

In the 1950s and 1960s, Eichler marketing was ubiquitous, with appeals like “Step into the wonderful world” and “Choose your plan … choose your look. No deposit required!” As an original buyer of Diamond Heights Eichler informed the San Francisco Examiner in 1997, the developer also had some optical tricks in his arsenal.

“He would paint two neighboring houses the same color to give potential buyers the illusion of a huge house,” resident Damon Lum told the examiner. “And Eichler decorated her model house with small Danish furniture that made the rooms look very good.” more spacious than they really were. “ 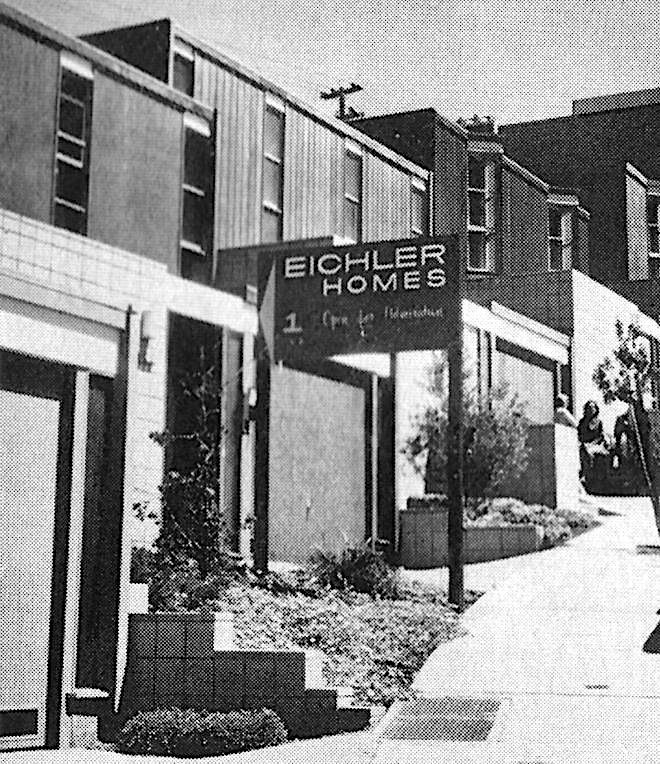 For Eichler Homes, which has been producing subdivisions for a good 15 years, the company’s entry into the San Francisco market was the beginning of the end. Between 1961 and 1963, the company’s spending increased nearly 25 percent, according to Adamson. Eichler’s idea that the middle class would return to the city was ahead of its time.

However, it wasn’t the single-family houses in the company, but the residential towers. As many contemporary developers know, getting an experimental, future-oriented building like the Summit up and running (or, let’s face it, a boring, predictable one) is a cash-intensive process since no unit can be rented or sold until the entire building is completed. Eichler was now used to selling houses individually after completion in order to finance later development phases.

The summit suffered cost overruns of $ 2 million before closing in 1965. In 1966, Eichler Homes went through bankruptcy proceedings in connection with further cost overruns on its Geneva Towers project in the Visitacion Valley. Shortly thereafter, Eichler and his son Ned Eichler sold a majority stake to two investors. But the company never got out of debt and ultimately collapsed.

But half a century later, the rare urban Eichler is in high demand – to the point that even half-destroyed copies fetch the highest price – and sales in a part of the city that is still more like an enclave of the ’60s and 70s feels low as part of town. At the Auberge’s newly announced Hearst Hotel in San Francisco