La Cocina’s ambitious 7,000-square-foot food hall recently opened in the Tenderloin, but it can be overwhelming to think about what to eat. Everything just sounds so good. The six providers touch different corners of the world – Senegal, El Salvador, Algeria and others – with offers such as hearty meat pies, peanut stew and Po’boys.

This project marks a first for the San Francisco nonprofit Incubator program, which has launched numerous local food businesses from mostly low-income migrant women – people who don’t often get the chance to open inpatient facilities in San Francisco. Although the cultures represented are different, there are small, poetic considerations that unite them: many of the vendors offer beans and rice in some form, demonstrating the seeming universality of the iconic combination, and all of them sell hearty $ 5 meals that Financially prepared will be accessible to low-income residents of the Tenderloin.

The space is bright and cheerful, decorated with blonde wood details, a purple neon dove, and an exposed ceiling. There is a lot of seating that you cannot take advantage of yet. For now, the grocery hall vendors are strictly adhering to the lunch-time takeaway and delivery service, although it is anticipated that it will be open for indoor dining in the summer along with the rest of California. Here’s what you should try:

Check out the jerk chicken tacos ($ 4.50 for one, $ 9 for three) at Tiffany Carter’s Creole kiosk. Gently charred chunks of jerk chicken seem like a natural fit for tacos, like a more flavorful pollo asado filling. Scotch Bonnet Pepper and Allspice give the chicken an astringent bite, while a soft blanket of thick crema soothes the palate.

For something more substantial, their Supreme Po-Boy ($ 12.50) is a whole bunch of sandwiches: the kind that could easily turn into two meals. The Cali-NOLA Hybrid Golden State offers a bunch of large, golden fried prawns embedded in creamy avocado slices, a combination so pleasant in its contrasts that I am surprised that it is not available on every po’boy shop- Menu stands. 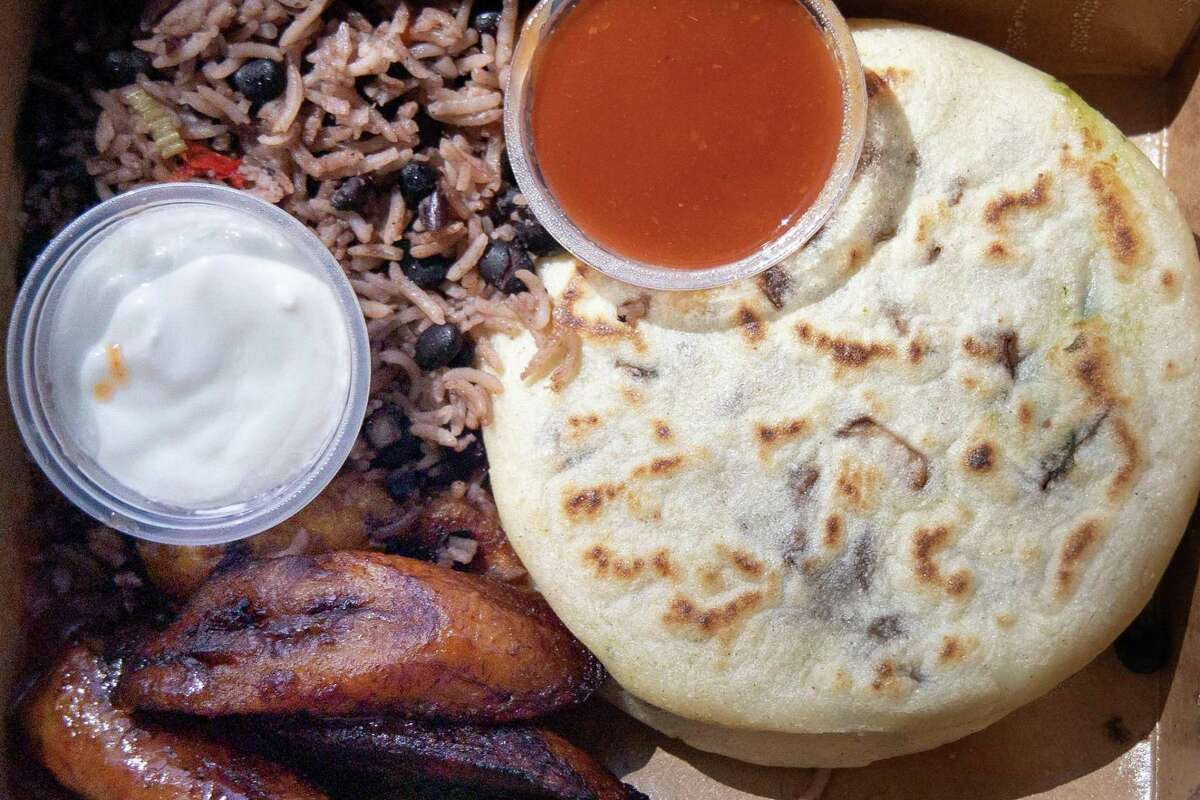 The vegan pupus plate at Estrellita’s Snacks, a restaurant in La Cocina Municipal Market Square on Wednesday May 19, 2021 in San Francisco, California.

Vegan products are popular at Estrella Gonzalez’s Salvadoran stand. The vegan tamal ($ 5) is steamed in a banana leaf and served so moist it almost looks like a flan.

And while the cheesy dolls are all great options, what I liked most was the vegan dolls ($ 4.50). Its interior is filled with silky beans, spinach, and juicy sauteed mushrooms. Since you will likely get this to take away or as a delivery, be sure to sear your dolls in a hot pan just before you eat to freshen up the inherent crispness of the masa cakes. 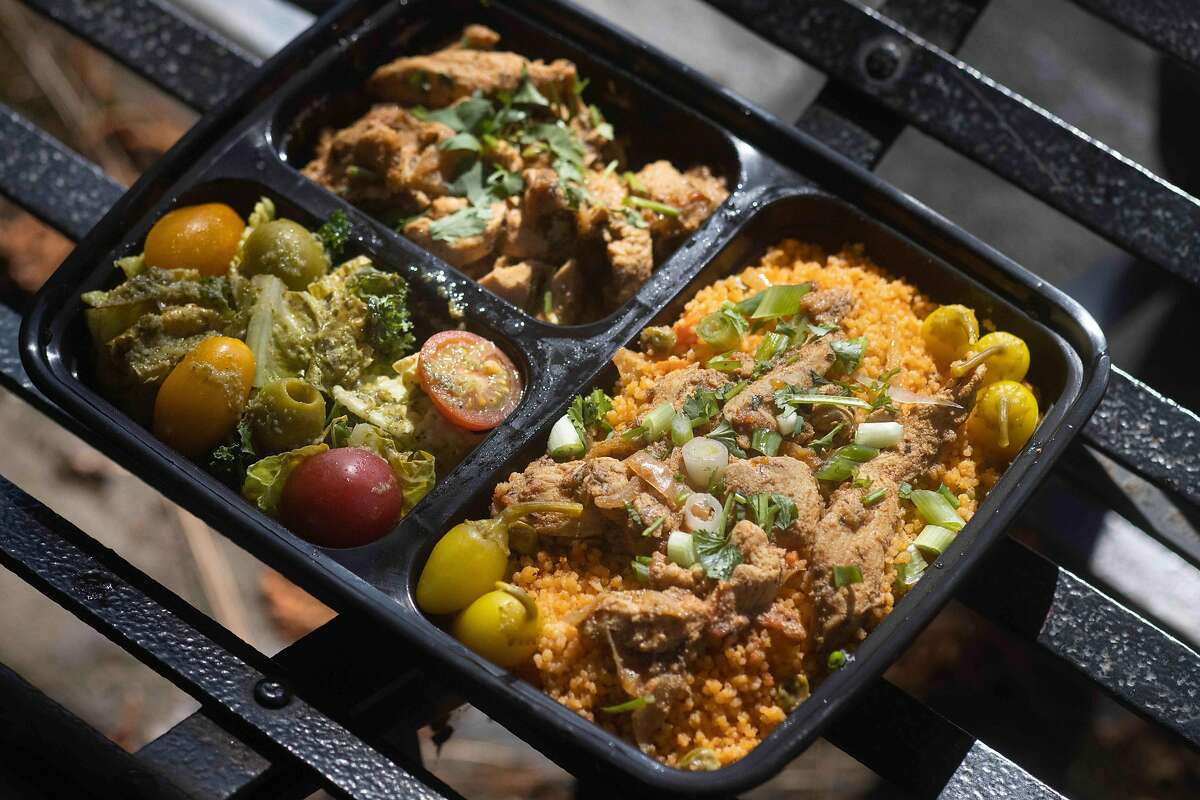 Wafa and Mounir Bahloul’s Algerian kiosk Kayma fills a large void in the San Francisco kitchen and does it well. If you’re a protein and grain desk lunchtime lover, you’ll love Bahlouls’ Le Kus Kus Chicken Bowl ($ 15.00), packed in separate compartments with yogurt-marinated chicken, semolina couscous, and salad. The aromatic couscous is cooked in a rich vegetable broth and served with tender chickpeas and other mixed vegetables. It’s a ton of food too.

As a nice addition to breakfast the next day, try the coca ($ 5), an Algerian twist on a Catalan sales with fillings like seasoned beef and tomatoes, mushrooms, and onions. The rectangular piece of cake is wrapped in a puff pastry that is scratched by hand and baked shortly after golden brown. Heat it in a toaster until hot and serve with a cup of mint tea. 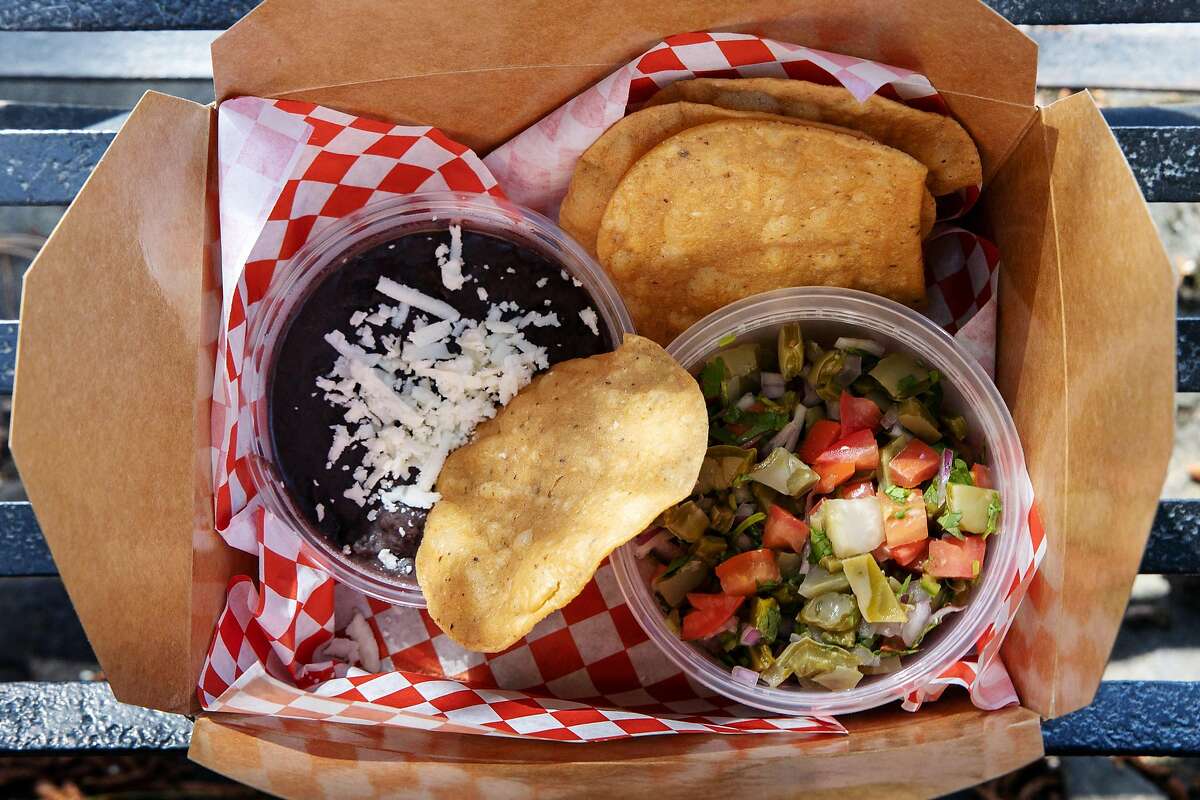 Get the tostadas ($ 16) lovingly packaged with each component separate, just like you’d find in your average Mexican lunch box. Berkeley chef and restaurateur Dilsa Lugo changes the available toppings every day, so you might find a cheeky cod ceviche, crispy nopal salad, or mushy pickled beef tendon among the offerings. The freshly made tostadas are crispy and smell of cornflakes. Each comes with a complementary set of side dishes, which can include shredded queso frescoes or ripe avocado slices. 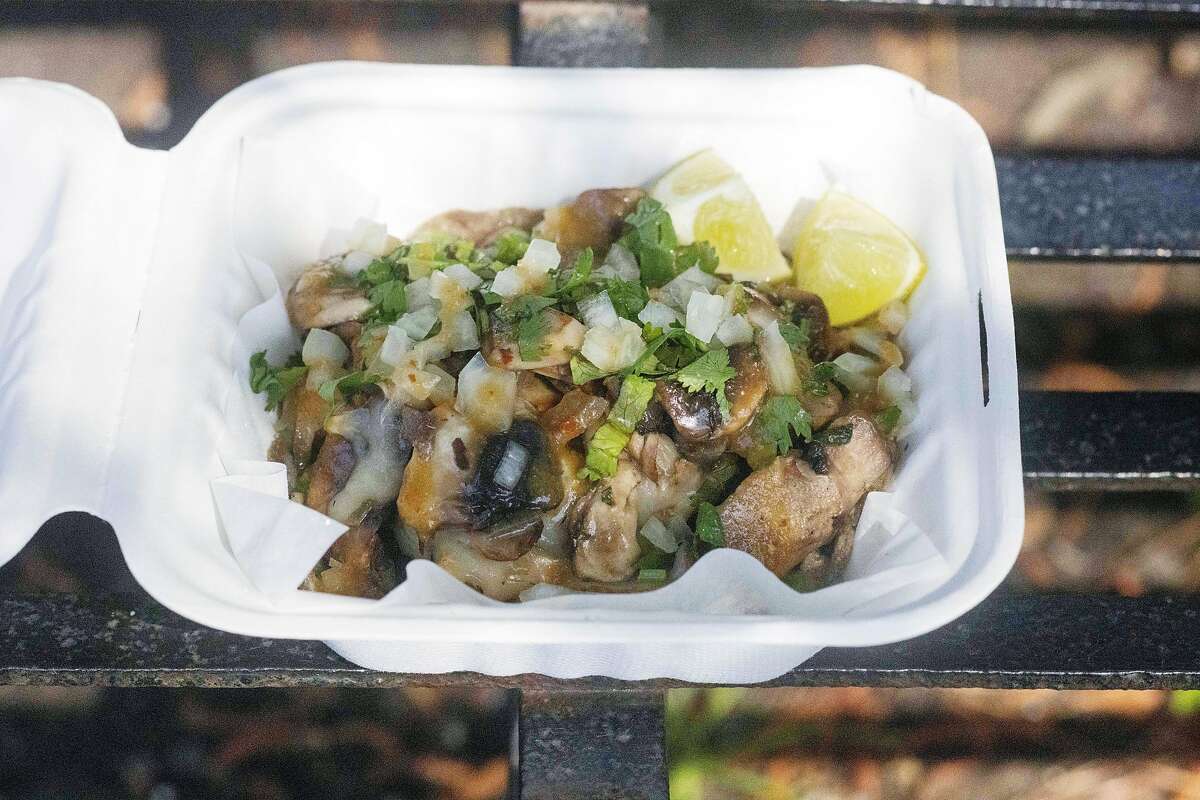 Guisados ​​are the soul-warming dishes typical of Mexico City’s home cooking, where street vendors serve pilemeat and vegetable stews and stews on handmade corn tortillas for breakfast and lunch. Mi Morena’s founder, Guadalupe Moreno of Mexico City, is repeating the experience by offering a wide variety of platter ($ 14) and tacos ($ 5) guisados, each complemented by soft organic blue or yellow corn tortillas become.

I love the rajas, the bitter, sweet and flavorful strips of poblano peppers with bubbles cooked with cubes of Yukon potatoes and onions. The starchy potatoes melt into something almost creamy, which makes the dish taste like a more exciting twist on Vichyssoise. And the mushroom guisado, seasoned with hot, potpourri-like epazote cabbage, is cooked light enough that the sliced ​​mushrooms still have a bit of bite. 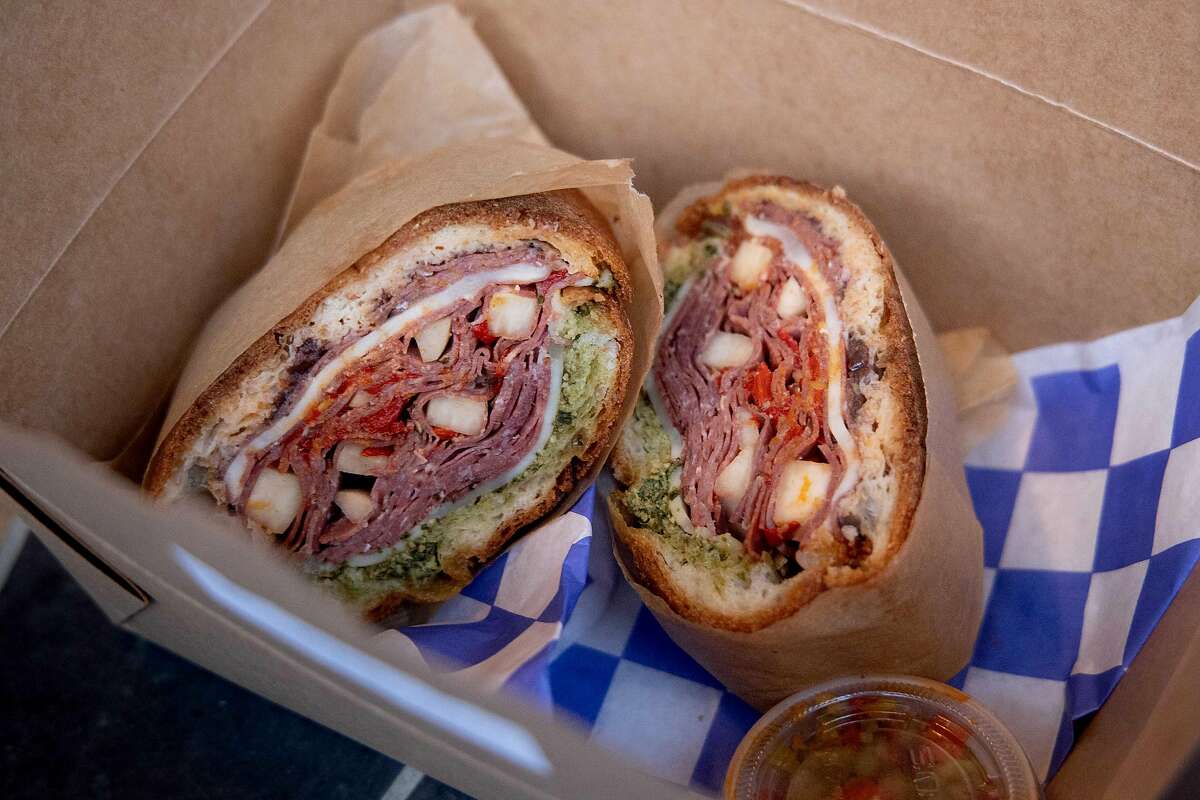 Nafy Ba Flatley founded Teranga as a baobab juice company that also offered aromatic organic dishes for delivery: cauliflower with turmeric baobab dressing, Senegalese empanadas and black-eyed pea chilli. Flatley’s new kiosk in the marketplace has more of this along with a robust selection of fruity baobab-based energy drinks.

One of the biggest surprises for me was the Mango Siff Sapp ($ 6), a dip made from spicy mashed mango paired with pita chips. Somewhat similar to the taste of the mangoes that were carved on the side of the road and doused with tajin spices by Mexican vendors, the dip showed a different and extremely pleasant way to experience the popular fruit.

For a heavyweight dish, we recommend the muffalettas ($ 12), a Senegalese twist on the classic New Orleans sandwich. In the omnivorous version, lamb, beef and turkey salamis are neatly layered so that the cross-section looks like a fleshy plaster of paris stone. The sandwiches are anchored by soft and crunchy bread dipped in a zesty pumpkin seed and basil pesto.

Here, San Francisco will likely move into the yellow row