It’s been a relatively quiet year for restaurant openings in San Francisco – is that not surprising? Most of what we’ve heard on high profile restaurant news lately has either been about beloved long-running spots that are closing or seasoned business owners struggling to stay afloat.

But we can’t deny that SF is still a world-class food city, with a food scene just as exciting as it has been for this entire decade. Things just aren’t as exhilarating and bubbly as they were about eight years ago when it felt like there was a grand opening every other week – and neither as decadent as it has been for the past five years when it seemed like every other new one Place millionaires and sales reps were served with unlimited spending budgets. And whether they called it minor or not, this was the first year in a decade that Bon Appetit didn’t reserve a place for San Francisco on its annual top ten list of the best new restaurants in the country.

But times change and moods change. After a period of six months of feeling like half of the newspaper columnists in the nation tried to write an obituary for our exhibition city, they may seem to have moved on, and we can try to focus on that when we close Focus on positive 2019.

For one, we save when it comes to some eating experiences. Three of the best new restaurants this year in SF don’t even have the right staff – they have opted for counter-rotating models to keep costs down while serving excellent food. A couple of these places will still set you back more than a pair of good shoes, but we may have – maybe! – Peak in prices. For now.

AL’s Deli
Chef Aaron London’s ode to his favorite foods of the past, which combines Israeli street food with Montreal-style Jewish deli, has resulted in a perfect weekday spot in Mission – which also doubles as a delivery / takeaway option, That don’t break the bank At AL’s Place, London has shown the world its establishment with Californian products and international flavors of all kinds. At AL’s Deli, he took this skill and applied it to casual kebab, brisket, and falafel sandwiches – and some excellent tomato salads – to give us all a new go-to place for delicious, healthy fast food.
598 Guerrero on the 18th. 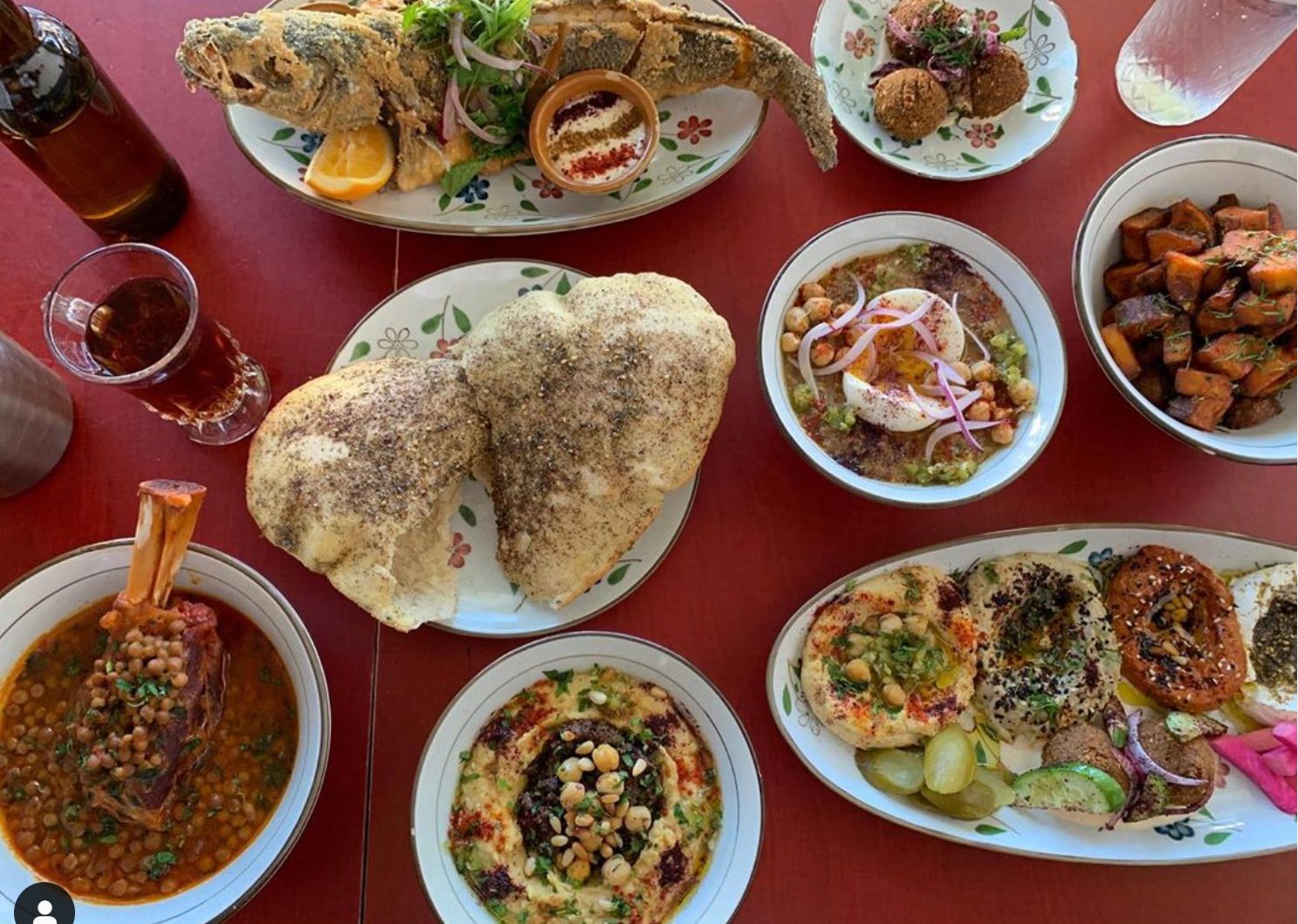 Beit Rima
I can stop complaining that I can’t find halloumi (fried cheese) in San Francisco because Beit Rima has it in their spades – and now at a second SF location in the Cole Valley (third including Daly City) . Samir Mogannam’s Palestinian-Jordanian restaurant took over the management of a mayor on Church Street earlier this year (his father owned the mayor chain and has now closed it). The hit parade on the menu includes some excellent ful, the mezze sampler, a fried whole branzino, a deeply satisfying braised leg of lamb, and some spiced, hand-kneaded pita made to order. Pro tip: get on the waitlist in the Yelp app before you set off.
138 Church Street and 86 Carl Street 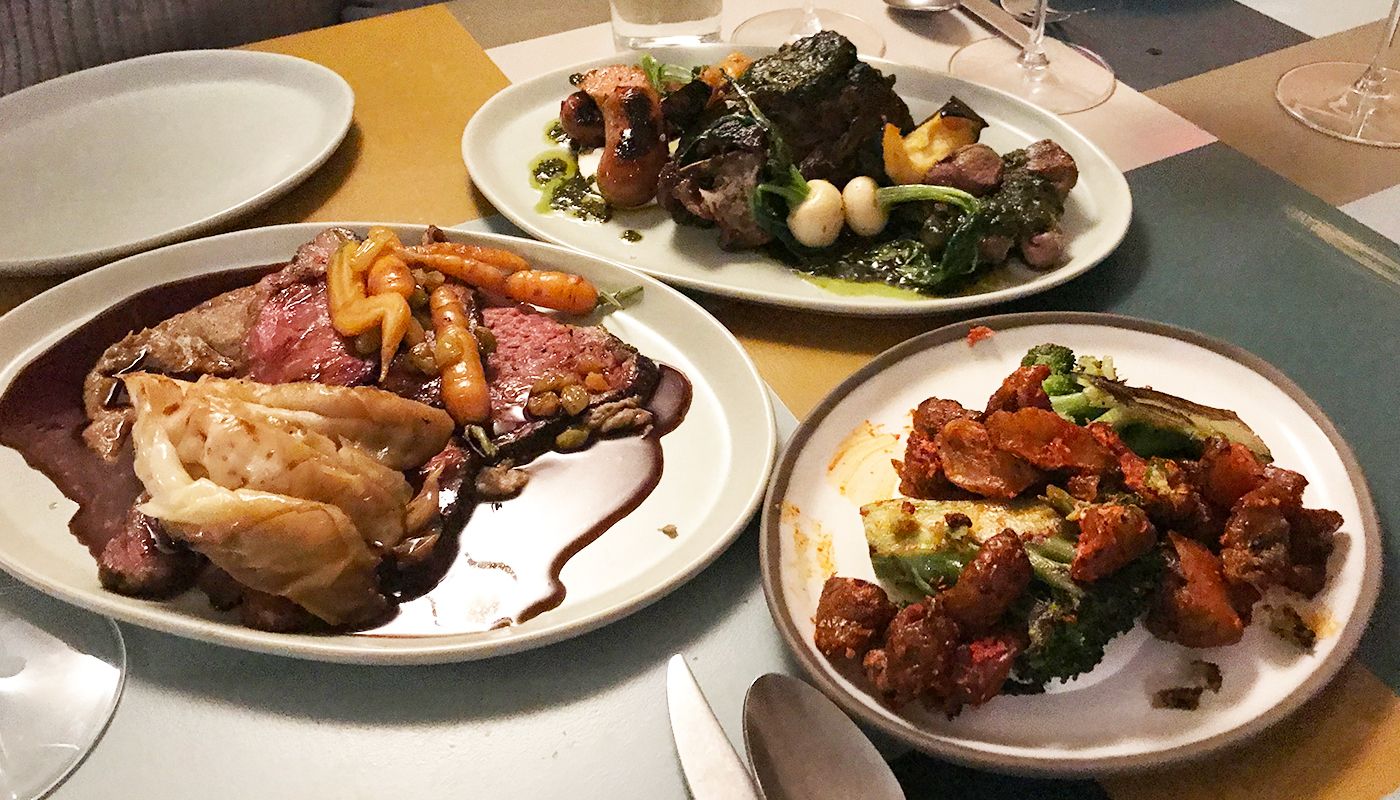 Dear Inga
Chances were good that the winning team of Ravi Kapur (LihoLiho Yacht Club, Prospect), Jeff Hanak (Nopa, LihoLiho) and chef Dave Golovin (Nopa, Spruce, La Folie) would beat it out of the park with a new Eastern European concept, and with Dear Inga they did it. Many of us still mourn Bar Tartine’s final incarnation, but Dear Inga takes on some similar influences and gives us a fresh look at the cuisine of Slovakia, Poland, Georgia and other nearby regions of the “old world”. The starters – especially the endive salad and the Liptauer cheese dip – are just as a dream as the smoked wild hen and the multi-faceted lamb dish, if you have it.
3560 18th Street 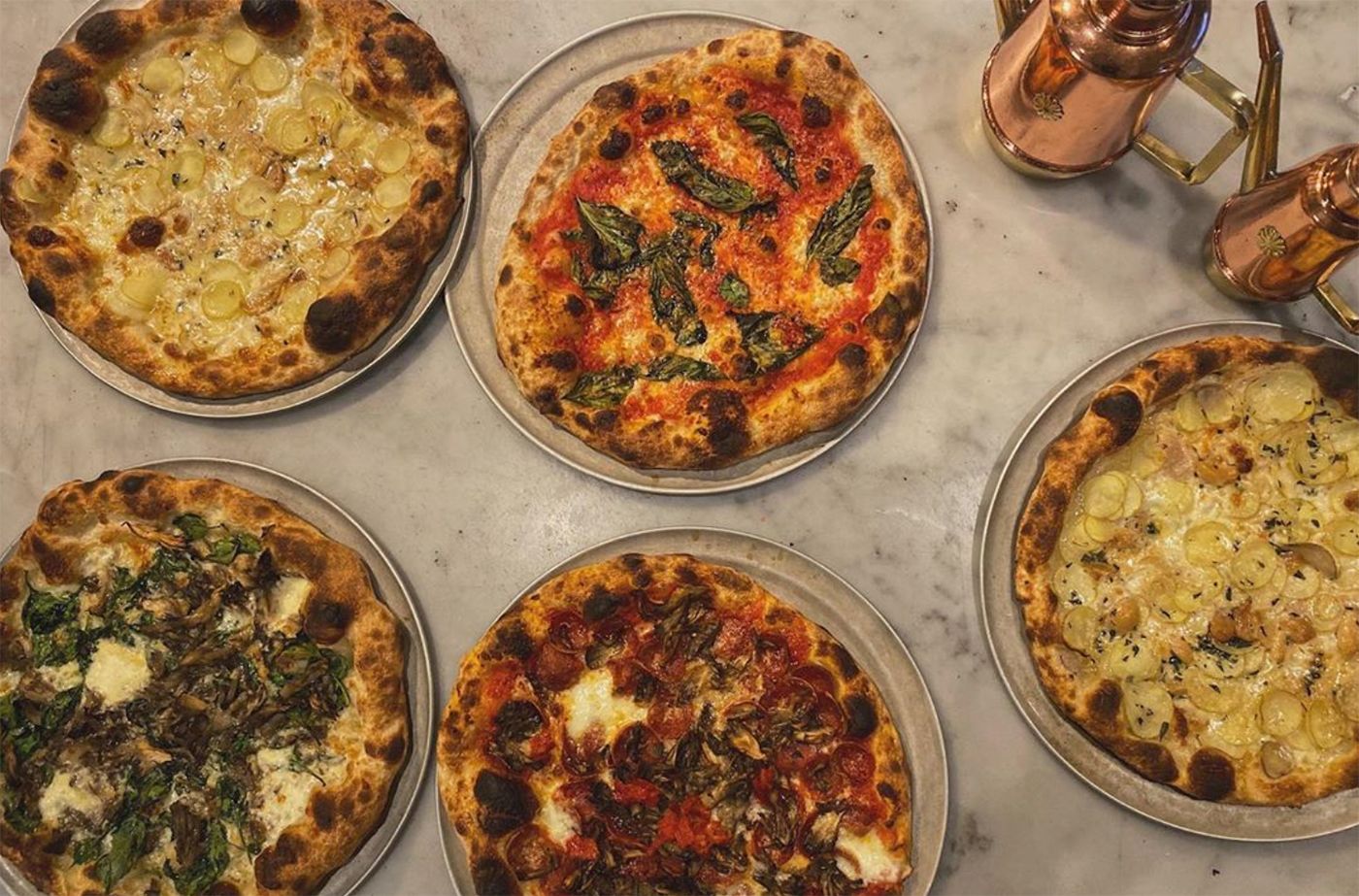 Flour & water pizzeria
When this beautiful room debuted as Farina Pizzeria on the 18th and Valencia a few years ago, there was lukewarm applause. But luckily, it has fallen into the hands of Chef Thomas McNaughton and his crew as now this is a pizza place to dream of and come back to that won’t get old. You traded the wood-burning oven at Flour + Water for a gas-fired, more traditional American deck oven, but the results are just as fantastic – with some great meatballs, fritto misto, and other items to get you started. It’s definitely more of a San Francisco feel than East Coast, though McNaughton wanted to evoke his Jersey roots. But the pizza is what matters – and it’s consistently crispy and generously topped, with my favorite being the sausage pie with olives.
702 Valencia Street on 18th. 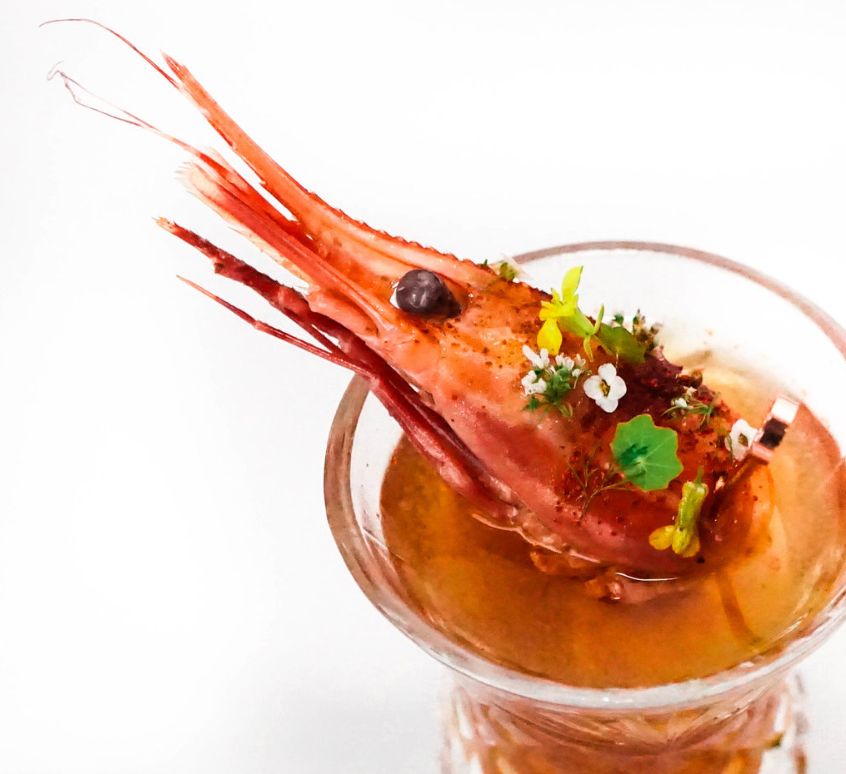 The table at Merchant Roots
I wrote about The Table at Merchant Roots back in August and it remains one of the main highlights of my culinary year. Chef Ryan Shelton brings the hype to a city where seasonal ingredients have always been king, with changing themed menus this year including “Color Theory”, “Vanity Fair” and “The Mad Hatter’s Tea Party”. Shelton and his team are as intellectual and rehearsed as they are adept at imagining which scene will come after which, and understanding which ingredients are evoked not just by their taste but also by their meaning and context. It’s ambitious cooking in a narrative style that feels new and also calms you down.
1365 Fillmore Street 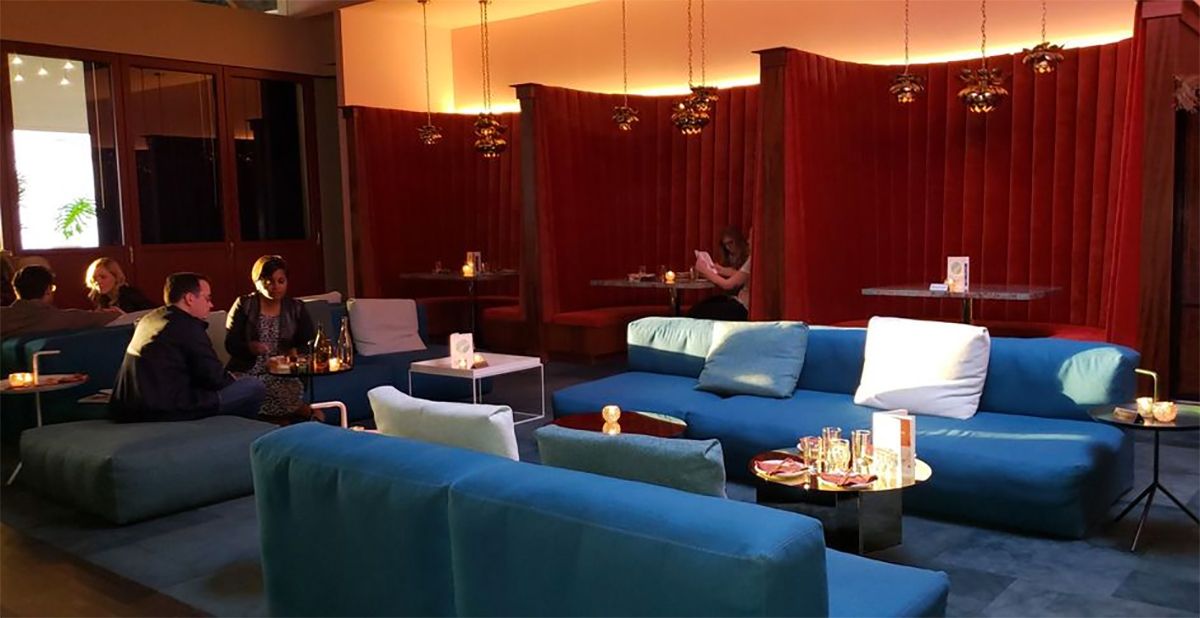 Moongate Lounge
The lavishly kitsch upstairs lounge at Mister Jiu’s made its debut earlier this year and is a cool new hangout and hideaway in Chinatown with creative, complex drinks from Danny Louie and Alex Kulick. While it’s more of a cocktail spot than a real restaurant, you can enjoy a light dinner – albeit not cheap – of wings, shrimp toast, and “space suit chicken” there. The former Four Seas banquet hall has been transformed into an events and weddings venue, providing a hangout with high-backed red velvet banquets to impress out-of-town friends.
28 Waverly Place, second floor 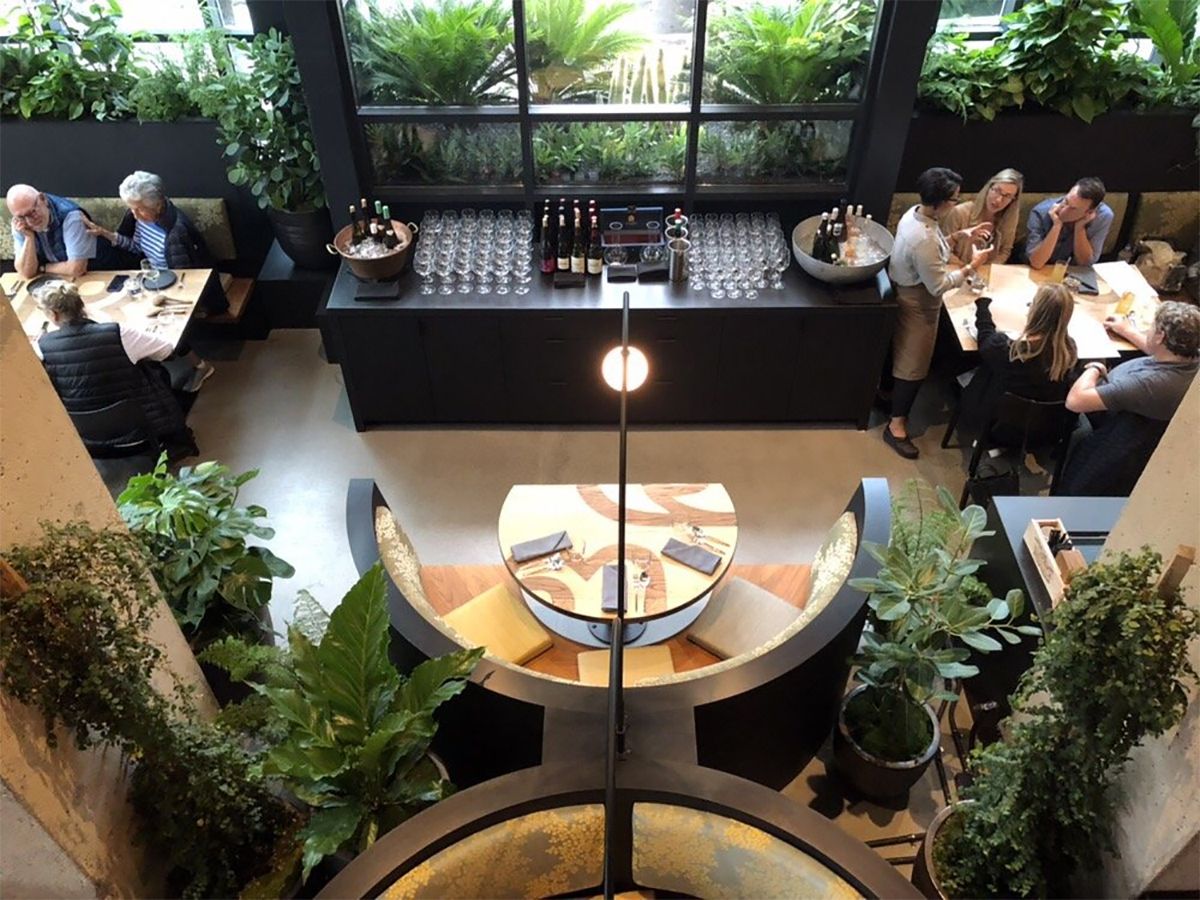 Nari
Pim Techamuanvivit’s larger, more ambitious sister restaurant to Kin Khao is much more than a hotel restaurant or a modern Thai restaurant. Along with the new lobby bar at Hotel Kabuki, Nari helped turn the formerly faded hotel in Japantown into an exciting destination for food and cocktails. And with chef Meghan Clark – a rising star of the chronicle – Techamuanvivit is driving the flavors of Thai dishes, which are unusual in the USA, and adapting them to the ingredients available in the Bay Area. And with 100 seats and 40 more at the upstairs bar, it’s a bigger room and screen for Techamuanvivit to view the Thai dishes from her family’s culinary memory – and she landed on Esquire’s list of the best new restaurants in the country .
1625 Post Street in the Kabuki Hotel 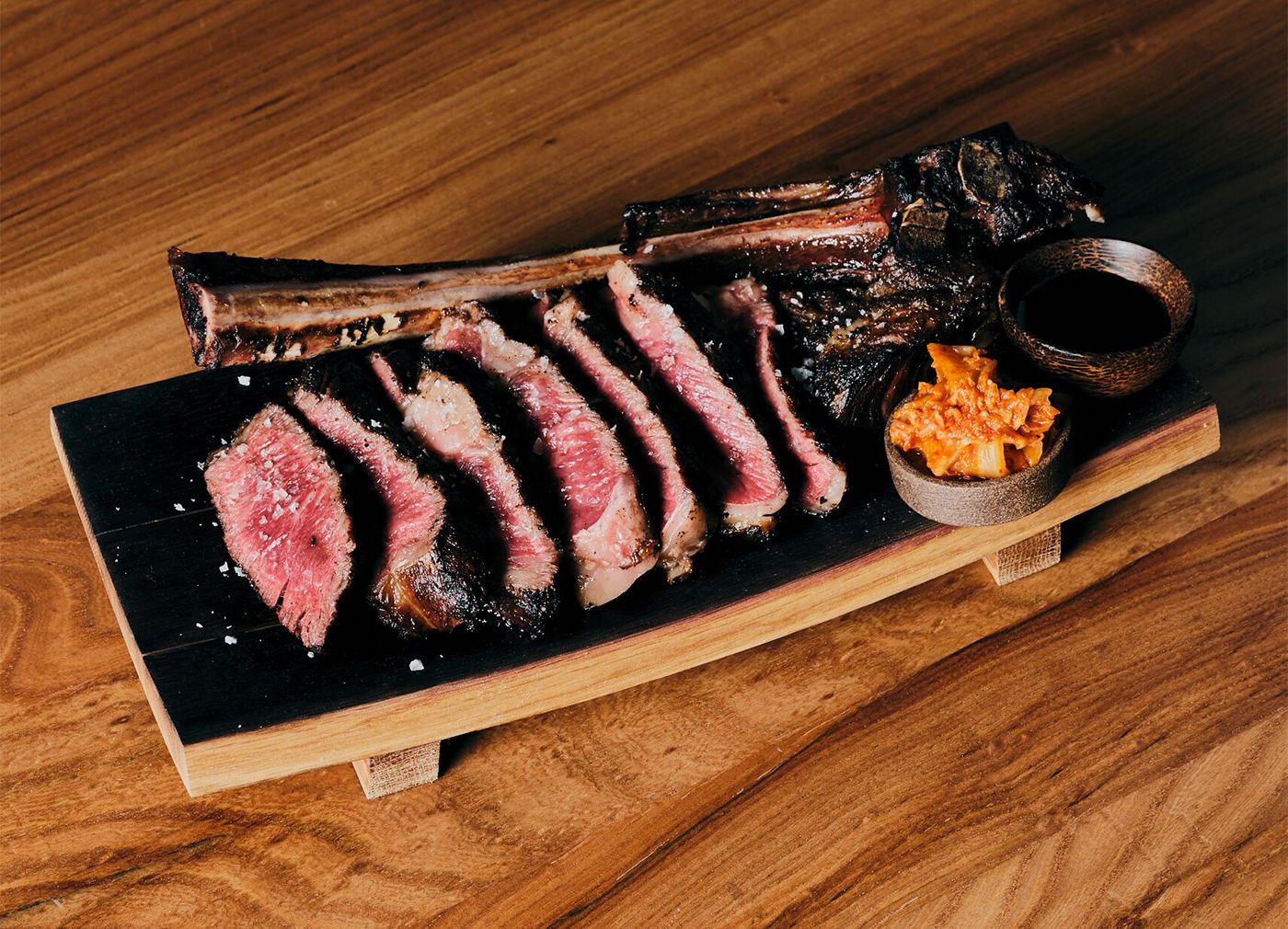 Niku Steakhouse
Niku Steakhouse opened in February under San Diego-based pop-up chef Steve Brown and enhanced by Chef Dustin Falcon. In the past ten months, the Niku Steakhouse has become a paradise for Baller Wagyu beef. No doubt this falls into the category of New San Francisco places to drop a grand over dinner. But in terms of modern steakhouses, this addition to the Omakase Restaurant Group gets high marks for quality meat and some delicious, well-coated entrees. And hey, if you’re not crazy about wine, you can get out of it for maybe $ 250 a person.
61 Division Street 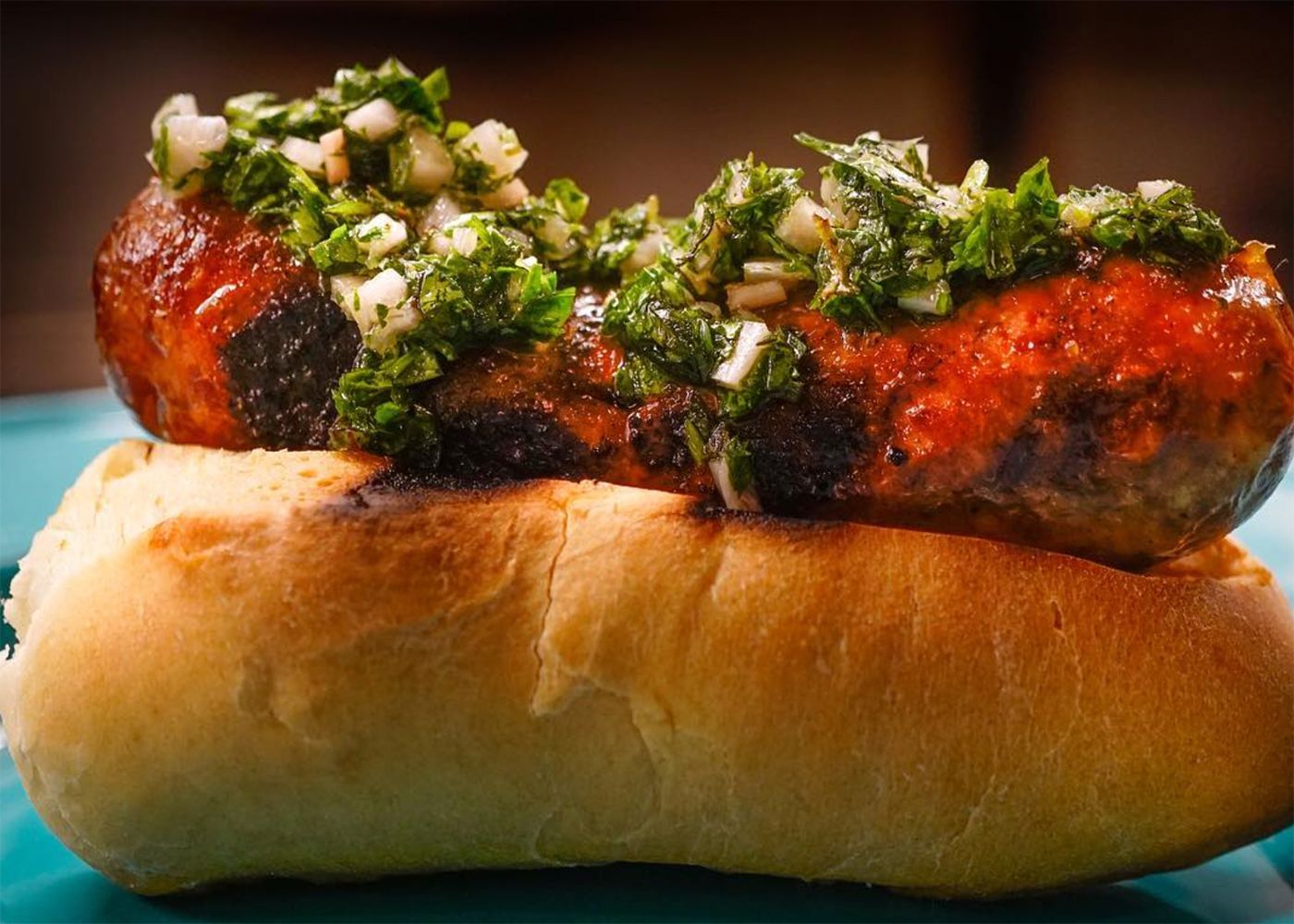 Obispo
The barman and restaurateur Thad Vogler (Bar Agricole, Trou Normand) opened this rum bar on 24th Street in Mission shortly after the New Year and thank God. A place where you can enjoy an excellently mixed cocktail along with a Cubano sandwich that dreams are made of and great jerk chicken for less than $ 35 may not sound like a showcase. But in the time and place where we live we must be grateful for such small victories. And the model of a casual weekday restaurant that’s also a high-end cocktail bar with a special focus – in this case the Caribbean – should be repeated.
3266 24th Street 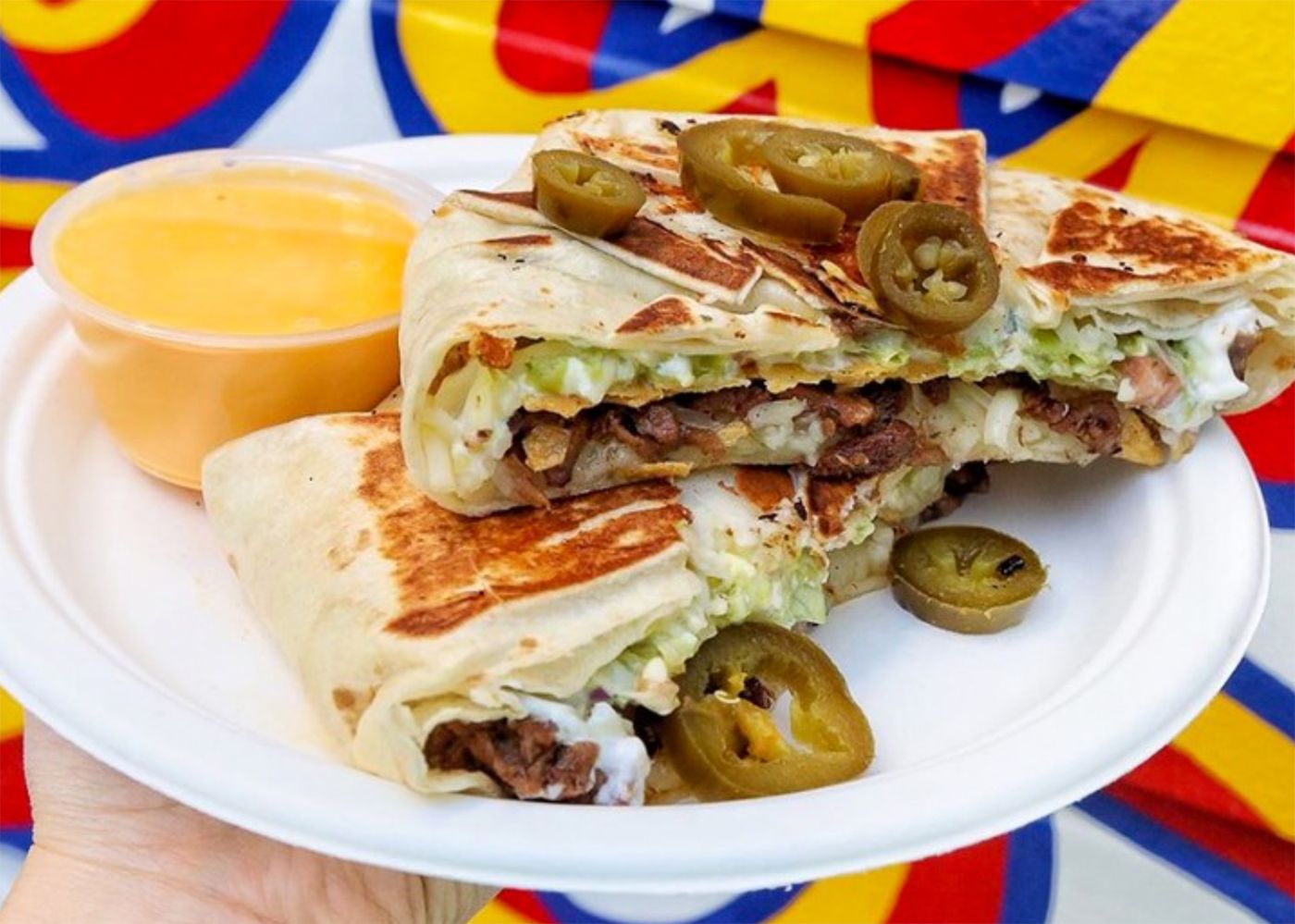 Mr. Sisig
A list of this year’s top openings wouldn’t be complete if one didn’t remember that this hometown food truck was well done – and not just because they picked up on Taco Bells Crunchwrap. A decade after street food caused a sensation in the Bay Area, the guys behind Señor Sisig – Evan Kidera and Gil Payumo – finally opened a stationary location in Mission. While Señor Sisig is nothing new to local fans of their sisig burritos, crunchwrap – technically called sisig crunch-a-dilla with nacho cheese dipping sauce – should make them on this list alone. It’s also really special to see a restaurant opening in SF in 2019 with nothing on the menu above $ 12.
990 Valencia Street near 21st 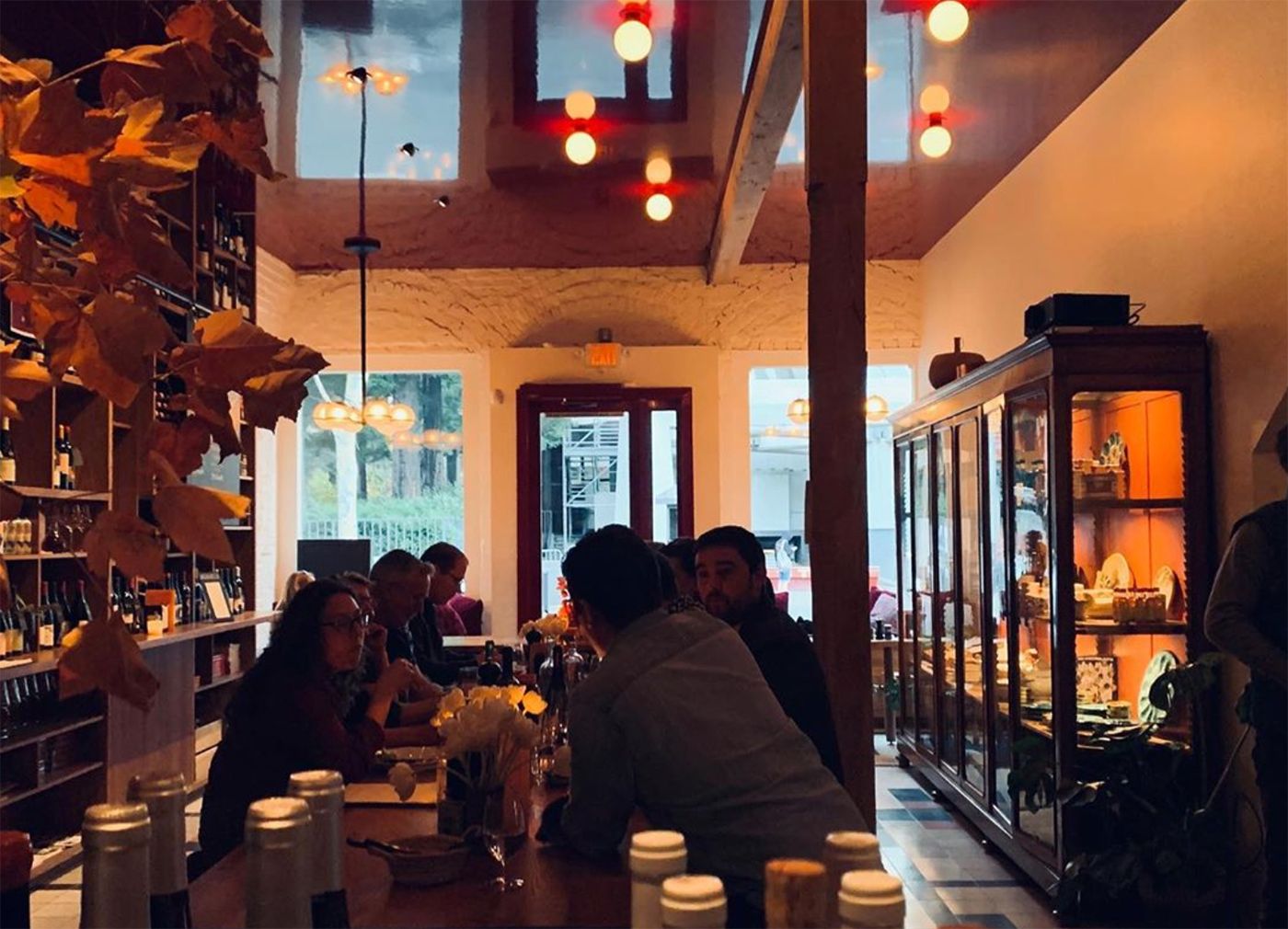 Verjuice
The Quince team’s wine bar and retail business are on the high end of free time even for this town. But the redesign of Parisian wine shops combined with perfectly executed bistro dishes is a great window into Chef Michael Tusk’s precision brand of comfort food – a low key version of what happens every night two blocks away at the Quince. Everything here revolves around crab tartines, pate en croute, veal sausage and pot au feu – the kind of French ribs that you want to have alongside glasses of Bordeaux in winter.
528 Washington Street

Honorable Mentions that opened in 2018 (while SFist was asleep):

The Embarcadero stunner of the season team, anglerDespite opening a year ago in August, it still has the luster of a new restaurant. Go for the great raw bar spreads and that delicious braised radicchio head, but stick for the excellent wood roast chicken.

Bead 6101 is a great asset to the residents of Outer Richmond and a dreamy and cozy destination for the rest of us. In addition to great seafood and pasta from co-chefs Joyce Conway and Mel Lopez and top notch cocktails, this is one of those neighborhood restaurants that has a vibe and feel to what the food in this town should always be.

The Architecture Department of the California College of the Arts is...

In California, vaccination is a priority, but testing is important –...

San Francisco police arrest a suspect in a home invasion